This is the second novel by the author of The Kite Runner. Hosseini left Afghanistan as a child in 1980 during the Soviet occupation and is now a U.S. representative on the U.N. Refugee Agency.

This novel follows the lives of two Afghan women through the turbulant years from the 1960’s to the present. The older woman grew up near Herat, the illegitimate daughter of a wealthy merchant and a house maid. She lives with her mother in a small isolated hut and her father teaches her to fish on his occasional visits. A kindly old imman teaches her to read and write a little and to memorize prayers from the Koran. It will be her only education. When her mother dies in 1974, the father arranges for the girl to marry a much older Pashtun widower from Kabul, a cobbler with his own business. The cobbler has a violent temper and his abuse and mistreatment of the girl increases as she is unable to give him a son or any child.

In the meantime the Shah is overthrown and Afghanistan becomes a republic. Communists gain influence and by 1980 the Soviets have occupied the country. The Soviet period in Kabul represents a high water mark for women in Afghanistan with equal opportunities in education and professional careers.

The second girl in the novel grows up during this time. Her father is a professor and she attends a good school where she exels. Her best friend is a boy who lost a leg to a land mine. As they grow their friendship turns to romance. Her much older brothers have joined the Mujahideen to fight the Soviets. Reagan supplies them with Stinger missles and anti-tank weapons. The brothers die but the Soviets leave Afghanistan as their empire self destructs.

The Mujahideen now break into tribal factions fighting each other in the streets of Kabul, their leaders, Sayyaf, the Hazaras, Massoud, Hekmatyar, with the treacherous Uzbek Dostum waiting to choose sides. Civilians die as rockets hit houses and business in Kabul, women and children are raped, and civilians beaten and killed because of their tribal origin.

The one legged boy leaves with his family for Pakistan. A rocket hits the girl’s house killing her parents and wounding her. The cobbler and his wife rescue and take care of her. The cobbler asks the girl to become his second wife. The girl knows she is pregnant by her one legged lover and agrees to the marriage. The cobbler’s business is burned in a rocket attack and the family become destitute. By 1992 the Mujahideen are in control and name Afghanistan an Islamic state. Fighting continues.

The Taliban, led by illiterate Pashtun radicals educated in Saudi financed madrasas in the tribal areas of Pakistan emerge as a unified fighting force, taking city and region one after another. By 1996 they enter Kabul. Among their restrictive rules, girls are no longer allowed to attend school. The Mujahideen retreat to form the Northern alliance in northern Afghanistan. Bin Laden sets up Al-Qaeda training camps in Afghanistan.

The one legged boy returns to Kabul and meets the girl, the cobbler tries to kill her and the first wife kills him. She is arrested by the Taliban and tried for murder while the one legged boy, girl, and children flee to Pakistan. 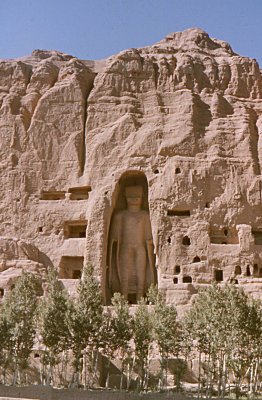 The Taliban destroy much of the cultural heritage of Afghanistan, and in 2001, they destroyed Bamiyan’s colossal Buddhas which stood for 1,500 years. Al-Qaeda attacks the U.S. and the U.S. declares war in 2002 against Afghanistan and the Taliban and Al-Qaeda. Some refugees, including the one legged boy and the girl, now married, and their children return to Kabul to assist with orphans and other refuges.

For more on the tribal areas of Pakistan, the arbitrary British border between Pakistan and Afghanistan, the Durand line drawn in 1893, and the story of the creation of Pakistan at the start of the cold war see.

A lone American former mountain climber, Greg Mortenson, worried about the absense of educational opportunities in isolated areas of Pakistan, has started a series of secular schools as an alternative to the radical madrasas which trained the Taliban. Mortenson has even negotiated successfully with Afghan drug warlords to be allowed build schools in isolated areas of Afghanistan.