Dignity in a Digital Age; Making Tech Work for all of Us, Ro Khanna, 2022 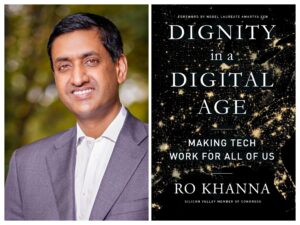 (Frederick) Douglass’s vision informs this book, which, at its heart is an attempt to imagine how technology can advance democratic patriotism, which is predicated on respecting the dignity of every American. The book shares Douglass’s faith that we can be a composite nation– that we can embrace a holistic, resplendent American identity that is more than just a formal contract among citizens. It offers a blueprint for structuring the technology revolution to empower left-behind Americans, regardless of their background, so they have a stronger voice in our economic and political life, building thriving communities, and are on more equal footing to participate in the dynamic process of developing our national culture.

We have looked thus far at how to respect dignity in a digital age domestically by focusing on distributing jobs, empowering workers, cultivating our freedoms, protecting online rights, creating deliberative forums, and including a multiplicity of voices in science policy.

This era calls for an Essential Workers Bill of Rights…The framework would promise livable wages, benefits, and bargaining rights for workers. It envisions giving employees a voice in shaping automation and pushing back against intrusive surveillance and abusive supervisors–a particular challenge in a remote and distributed workplace, which makes organizing difficult. Until all workers reap the benefits of their hard word and are treated with dignity, the promise of the digital age remains unfulfilled.

but nearly 80 percent of venture capital funding goes to only three states, California, New York, and Massachusetts. While California had nearly 4,000 VC deals and New York 1,400 in 2019, the state of West Virginia had only one.

A policy of creating new tech hubs should begin with the most promising locations and then gradually expand…Each hub would specialize in a few technologies based on their regional assets and expertise. The cutting edge fields would include quantum computing, data science, clean energy, cybersecurity, robotics, electronics manufacturing, and synthetic biology.

According to a Harlem Capital report, as of 2019, three are only two hundred startups led by Black or Brown founders that received more than $1 million in funding, and the total investment in these Black or Brown led start-ups is just $6 billions over nearly a decade. (Total VC funds deployed are $130 billion annually) The capital wealth gap is not just based on legacy assets but on a current, ongoing racial wealth generation gap.

The moral case for prioritizing workers is that they’ve been denied the gains they’ve helped create, and dignity that they’ve deserved, for multiple decades now. But the dollars and cents economic rationale is straightforward as well. While paying workers more may not maximize short-term shareholder value, in the way that stock buybacks or dividend payments do, it will lead to more consumer spending.

What they (Silicon Valley techies) may see as mundane and easily automated tasks actually are skilled ones, requiring dexterity, balance, judgment, practice, patience, precision, mapping, and a specific attention to detail.

Joel Rogers, a law professor at University of Wisconsin famously laid out the “high road” strategy, arguing that firms that foster worker participation and develop worker talent will generate more wealth compared to firms that use a top-down, command model to get the most out of their workers at the cheapest wage. Rogers argued that “shared prosperity”, “environmental sustainability”, and workplace democracy were “necessary complements, not tragic tradeoffs”, in maximizing revenue growth.

He (Gary Backer) said that the fuel for modern economic growth are investments in on-the-job training, health, information, and research and development. In fact, Becker argued that human capital, which is the “knowledge, information, ideas, skills, and health of individuals”, is “over 70 percent of the total capital in the United States.”

The ultimate design of Apple and Google’s Covid app is consistent with many of my Internet Bill of Rights principles, and it is an example of technology designed to meet these standards. The app requires a use to consent before any data is collected, and it offers an easy-to-understand explanation of how the data will be used. There is no centralized database, negating the major risk of data theft in a breach or the need for deletion. If someone is Covid positive, then they receive a digital code from their local health department to enter into their phone, which sends an anonymous exposure alert to every user in contact with them while they are infectious. Apple and Google both prioritized the need for interoperability so the app can work across platforms on any smartphone in the world. They made a concerted effort to minimize the data collected and committed not to have access to the data.

If tech companies are serious about promoting constructive dialogue, they should work with behavioral scientists, political theorists, psychologists, and mental health professionals to experiment with new designs. Software engineers should not only optimize for attention with like and share buttons, but to also prioritize for engagement with a wide range of perspectives. They could construct platforms for instance, that incentive users to participate in diverse online communities. Pushing opposing material to users can motivate them to become even stronger proponents of their ideologies…The key is to foster open-communications, and not simply self-affirmation.

The best we may be able to hope for in an imperfect democracy is a plurality of online forums for political conversations that (a) demonstrate a threshold respect for our agency as participants by not engaging in data extraction, (b) are transparent in terms of both their speech standards and the priorities of their algorithms, and (c) comply with legitimate restrictions on unlawful speech consistent with our First Amendment jurisprudence.

An Indiana University study that analyzed millions of tweets during the 2016 presidential election concluded that bots are a large contribute to the spread of misinformation and conspiracies. They share fabricated stories, make salacious content trend, and overwhelm investigatory teams with volume that makes it hard to find the offending postes. Most shockingly, the presence of fake accounts helps explains why “over 86% of shares and 75% of comments on German political Facebook from October 2018 to May 2019 were Alterative fur Deutschland content” even though the far-right party never “exceeded 15% of public support in polls during this time period”.