Simone’s birthday today – (Capricorn with moon in Pisces ), photo above by Cartier-Bresson in front of her home.
Before Germaine Greer there was Simone de Beauvoir. Her book
“The Second Sex” caused a sensation, later some feminists found her wanting because her slavish devotion to Sartre betrayed her Feminism.

‘Our relationship was the greatest achievement of my life’

Stand By Your Man: The strange liaison of Sartre and Beauvoir by Louis Menand (New Yorker) 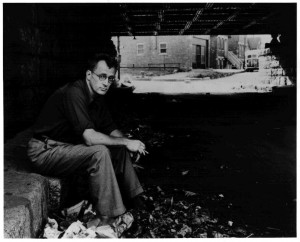 It was Nelson Algren who brought Simone to life .

Until his death in 1981, Algren was recalling the affair bitterly, although upon de Beauvoir’s death in 1986, she was buried wearing a silver ring that Algren had given her nearly forty years before.

(Excerpts)
18 may 47
“My precious beloved chicago man, I think of you in Paris, In paris I miss you.

Fri 21 nov 47
…I really care much for writing since I am a child, I gave my life to it, but you never know what you do, and sometimes I am afraid I shall never really do what I want to. Then I try to do something with Sartre in intellectual french life, with the hope it has real human meaning– and i have not much hope. Sometimes you can work without hope, but when you are weak it becomes difficult. Then I stay far away from the man I love, from the happiness he gives to me:…”

Who can blame Algren for later denouncing her and call her Madame Yakity Yak. Simone’s shabby treatment of Nelson Algren was well documented in their respective biographies.

Claude Chabrol’s film based on Simone de Beauvoir’s novel “The Blood of Others”, starring Jodie Foster did not get distributed in USA.