Seems I ‘m Never Tired of Loving You

Dr Nina Simone sings for you. 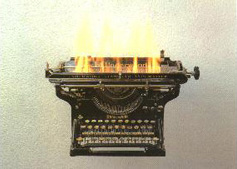 Leopoldo Maler
Argentinean, born 1937
Hommage, 1974
Modified typewriter
“The work before you, entitled Hommage, has a great deal of personal meaning for Maler himself, however. His uncle, a well-known Argentine writer, is believed to have been killed for the inflammatory content of his political essays. The old Underwood Typewriter that now emits flames in the place of words is of the same style that Mahler’s uncle used during his esteemed career.”
From here.
(following a conversation at pas au-dela and in gratitude for the
link restored for scarecrow.
May Hunter S. Thompson have a safe passage.)