The Catholics got a new Pope and the citizens of the world got a new James Bond. HBO was circulating Sylvia on the network, we will see more of Daniel Craig who played Ted Hughes in the coming days.
Poets had Ted and Sylvia . (Seamus Heany said that their union was mythopoetic. ) Unlike Ted & Sylvia who played monster and a victim, Leon Golub and Nancy Spero, as a great painting duo inspired us all with their brash style of protest through their work and shared with public their comraderie, love and respect they have for each other.

See his
We Love Our Leader and other paintings by Leon Golub. 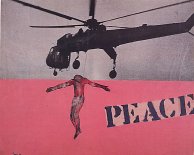 A tribute was paid to Leon Golub on April 17 at Cooper’s Union. (from here).
“Golub’s outsized paintings bear searing and prophetic witness to a history of war and oppression, conflict and violence. In the iconography of the second half of the twentieth century art, his images of mercenaries, napalm victims, goons, and white squads create an implacable lexicon. Not withstanding the seriousness of Golub’s commitment to his politics in paint, his work was filled with pathos and a raunchy sense of humor and sexuality. Family, friends, colleagues, and students will miss his extraordinary knowledge and wit, his love of provocative discourse, and his generosity.”

Something unexpected happened in the closing minutes of the memorial for Leon Golub in the Great Hall at Cooper Union last Sunday,(read more here.)

An old interview of Leon and Nancy is here.

Hitler’s birthday today.
Two Hitler movies one imaginary and the other more historical, Max and Downfall.