Jung Chang and her husband’s book”Mao:The Unknown Story’ is out and a review is here.
“the book uses sources they have unearthed that reveal Mao as a psychopathic leader, responsible for the deaths of 70 million, and driven by a hunger for power.”
“Mao was deeply influenced by Fredrick Paulsen, a minor German philosopher who shunned all constraints of responsibility and duty. He put his theories into practice during the Long March and in Yenan, the Communists’ first headquarters in China.”

“Contrary to the perceived idea that Stalin disapproved of Mao, Halliday says these documents revealed that the Soviet leader had talent-spotted his Chinese counterpart and nurtured his power-base from the 1920s. “Mao always perpetuated the myth that he’d risen to power without help from the Russians. But he was the one that the Russians were pushing and protecting.” The material Halliday unearthed on four trips to Moscow was so extraordinary, he remembers leaving the archives at 4pm every day, bathed in sweat.”

The Last Banquet by Zhang Hongtu/Hongtu Zhang
“Sometimes the hole in my work might remind you of the Nothingness of Taoism or the negative space of traditional Chinese ink painting, but the visual inspiration of my work comes directly from a bagel.”
(via) 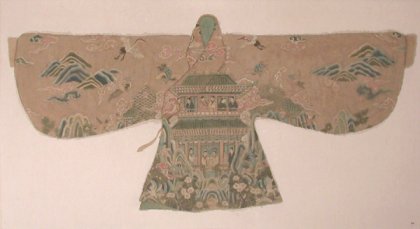 PENG WEI (b. 1974)
Robe / Palace on the Immortal Mountains
Ink and color on paper, with one seal of the artist, Peng Wei
(From The Ancient Robe – New Ideas.)