Deprecated: Return type of HM\BackUpWordPress\CleanUpIterator::accept() should either be compatible with FilterIterator::accept(): bool, or the #[\ReturnTypeWillChange] attribute should be used to temporarily suppress the notice in /home/mutanteg/public_html/vitro-nasu/wp-content/plugins/backupwordpress/classes/class-path.php on line 456
 RIP Kayo Hatta – Vitro Nasu
Previous
Next

Found about this sad news today. There was a headline a while ago about accidental drowning in Southern California but did not connect the tragedy with the filmmaker who made the “Picture Bride“.
This lovely film was produced by an acquaintance (Lisa Onodera) and our family and Friends in Hawaii feel extremely proud of their achievement. 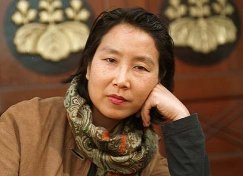 “Kayo turned to adapting the novel The Floating World. But amazingly, she faced disappointment after disappointment trying to get the project financed and going. Even after her success, very few were willing to take a chance on Asian or Asian American material.”
( I wonder if it is the same “The Floating World” by Cynthia Kadohata.
It is a great loss – I would like to see how she would have realized that singular vision Cynthia created in her fresh novel. More on Cynthia check my previous post).
(*** As a personal aside, my grandmother was a picture bride but she was a Chinese peasant with big feet, who left Canton China to marry an overseas Chinese man in Japan. She married on the boat to a rooster instead of a young man she had never met. I never bothered to ask her about the symbolism of a rooster taking over for the absent husband. Don’t know if there was a cockfight after that. My grandmother uncharacteristically was a heavy smoker all her life and she was seventeen when she married. Lucky that she was a peasant, as she escaped having her feet bound. My grandmother did not fear sex or frank discussions – she was a very level headed former picture bride. Her arranged marriage produced more than 8 children and had a relatively happy union except for my grandfather’s occasional opium smoking. )
Rent ‘Picture Bride” (might find it at your local library) or read “Floating World” and thanks to Kayo Hatta for your courage and hard work and we will remember, try to continue and follow your example.