Happy Birthday Tilda Swinton.
Tilda shares the birthday (Nov 5) with another great English actress
Vivien Leigh.
The NYtimes on this day mentioned Vivien and forgot about Tilda.
Instead they featured Tatum O’neal with her photo.

The above photo of

Edward Said was born on Nov 1 and he too was not included in the NY times column – (now competing with the National Enquirer).
I never finished reading his famous book “The Orientalism”. At least I tried. He was by far one of the most attractive intellectual/thinkers we have had. He was an Arab Christian.
(I did not know that there was such a thing until my visit to Israel and visited an area inhabited by Arab Christians).

Here are some links on Edward Said;
“He will always be my hero” “How they met and became friends for life – a Palestinian thinker and a Jewish conductor and a great pianist from Israel.”

Sound and vision: Edward Said was a great thinker. And it was music that made him tick. Daniel Barenbolm remembers his playing partner

Optimism of the Will Asad Raza’s fond memories of his great teacher. (from 3quarks daily). 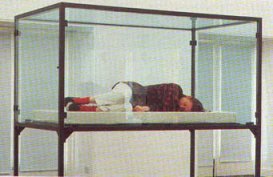 Tilda Swinton was Sleeping Beauty in 1995, when she climbed inside a glass case at the Serpentine Gallery and dozed, eight hours a day, for Cornelia Parker‘s exhibit The Maybe. (from here).

In this interview Tilda said, “I sometimes think I was always left-wing,” she says.
She is brilliant and gifted with words, sample here from her eulogy to Derek Jarman.

Tilda was very funny in “Female Perversions” in which she played an uptight career woman not exactly like Maureen Dawd, Michiko Kakutani or Judith Miller but close enough.
She can play ordinary wife leading drab existence in films like “The Deep End” “The War Room” and ” The Young Adam”. Her lack of vanity is quite refreshing.

Both Tilda and Vivien Leigh are Scorpio Ox, the Bemused Behemoth.