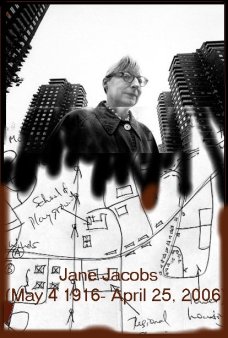 There is perhaps no person in the 20th Century who was more influential in raising the benchmark for our quality of life in cities than Jane Jacobs, who died on April 25, 2006 at 89.
Remembering Jane Jacobs (Cool Town Studios)

She decided to leave the United States in part out of her objection to the Vietnam War and due to worry about the fate of her two draft-age sons. She chose Toronto as she found it a pleasant city and its rapid growth meant plenty of work for her architect husband. She quickly became a leading figure in her new city and was involved in stopping the Spadina Expressway. A common theme of her work has been to question whether we are building cities for people or for cars. She has been arrested twice during demonstrations. (Jane Jacobs Wikipedia)

D+A = nD (D is labor division in a given economic system, A new activities of entrepreneurs and nD the resulting new form of labor division.)

In the forty-plus years since her book “The Death and Life of Great American Cities” appeared, her views, which then seemed wildly eccentric—basically, that New York’s future depended less on tall buildings and big projects than on the preservation of small, old blocks and catch-as-catch-can retailing—have been vindicated so many times, and in so many ways, that by now one can hardly think about this city without thinking about her, and like her.

Jacobs has closely followed the Ground Zero plans and debates, and she thinks that the right thing to do is not to do anything right away. “The significance of that site now is that we don’t know what its significance is,” she said. “We’ll know in fifteen or twenty years.”
(Cities and Songs – Adam Gopnik, New Yorker )