A Sadness as Deep as Sea by Jaime Manrique

“Jaime, what a life I’ve had. Even before the revolution, it was bad enough the agony of being an intellectual queen in Cuba. What a sad an hypocritical world that was,” he paused. “Finally, I leave that hell, and come here full of hopes. And this turns out to be another hell; the worship of money is as bad as the worst in Cuba. All these years, I’ve felt Manhattan was just another island-jail. A bigger jail with more distractions but a jail nonetheless. It just goes to show that there are more than two hells. I left one kind of hell behind and fell into another kind. I never thought I would live to see us plunge again into the dark ages. This plague — AIDS — is but a symptom of the sickness of our age.”

I am that child
with the round, dirty face
who on every corner bothers you with his
” Can you spare a quater?”

Look me in the eyes with contempt then sentence me, My Lover Sea.

The ocean….Blue….Not at first (the first sentence of his novel, Farewell to the Sea, a Novel of Cuba.) 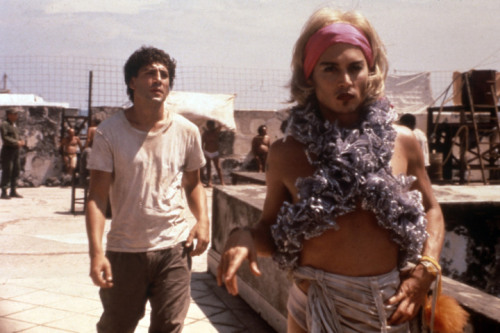 Before Night Falls a beautiful film based on his memoire adapted and directed by Julian Schnabel.

Saw this film for the 3rd or 4th times just a few days ago and thought that if anything Schnabel will be remembered more for this film if not for his neo-expressionist paintings of the early 80’s.

Group Photo of Reinaldo with Nestor Almendros in Cuba.

Reinaldo was a Cancer/Goat, a sensitive provider.