An Inner Silence: The Portraits of Henri Cartier-Bresson 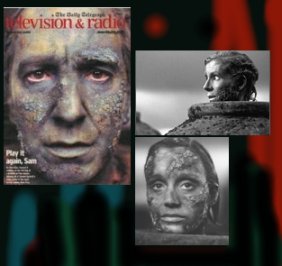 Three urns stand on the stage. From each, a head protrudes – a man and two women. The play tells the story of a love triangle, and each character narrates a bitter history and their role in it. On the stage, each head is provoked into speech by an spotlight. In the film, the camera takes the role of the spotlight. (Synopsis)

You only discover Beckett’s genius once you start immersing yourself in the material. Beckett completely altered our vision of what theatre can do. In a sense they are not really plays but theatrical events. He is more a poet or installation artist, or performance artist, or some strange combination of all of those things, than a playwright. He pays as much attention to what sound and light are doing as he does to text. Stevenson on Play.

In 1965 Philip Glass composed music for a production of Play. The piece was scored for two soprano saxophones, and is his first work in a minimalist idiom – an idiom which was substantially influenced by the work of Beckett. From here.

Sam I Am (from the New Yorker by Benjamin Kunkel)

Beckett’s work can lay a strong claim to universality: not everyone has a God, but who doesn’t have a Godot?