Deprecated: Return type of HM\BackUpWordPress\CleanUpIterator::accept() should either be compatible with FilterIterator::accept(): bool, or the #[\ReturnTypeWillChange] attribute should be used to temporarily suppress the notice in /home/mutanteg/public_html/vitro-nasu/wp-content/plugins/backupwordpress/classes/class-path.php on line 456
 Gunter Uecker – Vitro Nasu
Previous
Next 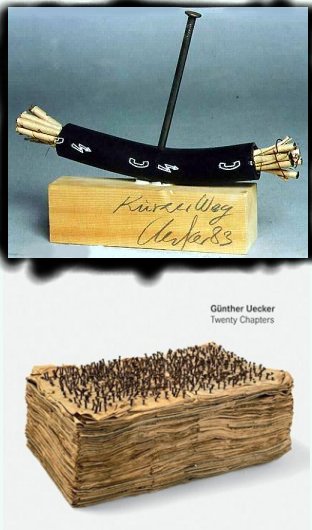 Bottom image is the cover design of Gunter Uecker:Twenty Chapters

Read about his early days. Yves Klein was his brother in law from
Oscillating Perception: Notes on the works of Gunter Uecker.

This early nailed TV object places Günter Uecker, known for his usage of nails as sculptural material, among a series of artists who aggressively inverted the force of a medium they felt to be negative and destructive.