The Innocents
The King and I 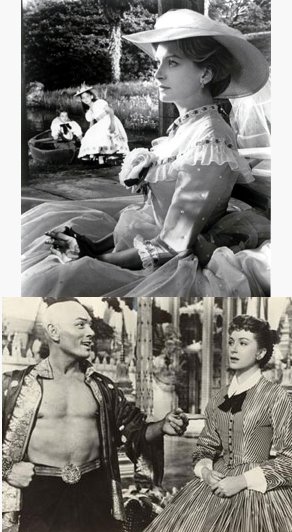 The Innocents (The Turn of the Screw) Youtube trailer. This is an adaptation of Henry James’ creepy story with Truman Capote on the script team and directed by Jack Clayton.

I suppose the part nearest me is Laura Reynolds in Tea and Sympathy. Of course playwright Bob Anderson didn’t know that, but he wrote Laura Reynolds and Laura Reynolds happened to be me. It was the coming together of a part and an actress – the same attitude to life, a certain shyness in life, a deep compassion for people who are being persecuted for anything. (via)

Heaven Knows Mr Allyson– Whenever Deborah plays a nun, the films turns into instant classics. (Previously she played a nun in Black Narcissus by Michael Powell). Robert Mitchum and Deborah had a great chemistry (the reefer and the nun).

Other films with Robert include the Sundowner and The Grass is Greener. Cary Grant was too weird for Deborah in real life but they made a great pair on screen. He must have had a crush on her. She had a chance to be sexy and bad with Burt Lancaster.

They separated, but he never forgot. They shared a birthday, September 30. Each year on that date, right up to the year before his death, he sent her a bouquet of flowers with the simplest of notes: “Happy Birthday, Darling.”( Self-Styled Siren)

The End of an Affair based on Graham Green’s classic.