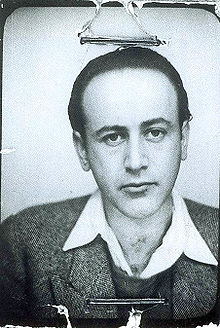 Poet, translator, essayist, and lecturer, influenced by French Surrealism and Symbolism. Celan was born in Romania, he lived in France, and wrote in German. His parents were killed in the Holocaust; the author himself escaped death by working in a Nazi labor camp. “Death is a Master from Germany”, Celan’s most quoted words, translated into English in different ways, are from the poem ‘Todesfuge’ (Death Fugue).

“A poem, as a manifestation of language and thus essentially dialogue, can be a message in a bottle, sent out in the – not always greatly hopeful – belief that somewhere and sometime it could was up on land, on heartland perhaps. Poems in this sense, too, are under way: they are making toward something.”

I HEAR THE AXE HAS FLOWERED,
I hear the place can’t be named,

I hear the bread that looks on him
heals the hanged man,
the bread his wife baked him,

I hear they call life
the only refuge.

Translated by by Ian Fairley

Paul Celan was born on 23 November 1920.
Celan is an anagram of the Romanian spelling of his surname, Ancel. (Paul Celan wiki)
Last Poems by Paul Celan