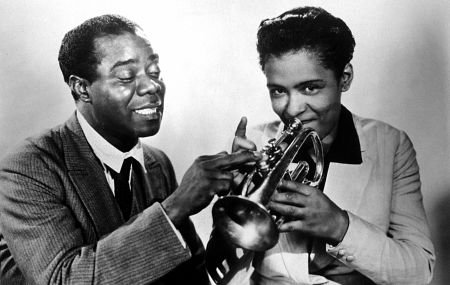 Louis Armstrong was born in a poor section of New Orleans known as “the Battlefield” on August 4, 1901.

By the time of his death in 1971, the man known around the world as Satchmo was widely recognized as a founding father of jazz—a uniquely American art form. His influence, as an artist and cultural icon, is universal, unmatched, and very much alive today.

Louis Armstrong’s achievements are remarkable. During his career, he:

developed a way of playing jazz, as an instrumentalist and a vocalist, which has had an impact on all musicians to follow;
recorded hit songs for five decades, and his music is still heard today on television and radio and in films;
wrote two autobiographies, more than ten magazine articles, hundreds of pages of memoirs, and thousands of letters;
appeared in more than thirty films (over twenty were full-length features) as a gifted actor with superb comic timing and an unabashed joy of life;
composed dozens of songs that have become jazz standards;
performed an average of 300 concerts each year, with his frequent tours to all parts of the world earning him the nickname “Ambassador Satch,” and became one of the first great celebrities of the twentieth century.