“A city of brick and tired wood,” he called his native city. “Primitive Pittsburgh.” Many of his poems have a straightforward lyricism that grabs you right away. According to a piece about the poet that was published just yesterday in the Los Angeles Times, “At Gilbert’s readings, audience members were known to burst into tears.”

Coming to the End of His Triumph: A Retrospective on Jack Gilbert 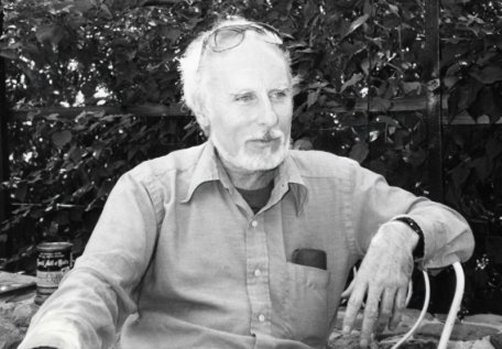 James Dickey said, “He takes himself away to a place more inward than is safe to go; from that awful silence and tightening, he returns to us poems of savage compassion”

In 1966 Gilbert left the country with his companion, the poet Linda Gregg. They lived in Greece, on the islands of Paros and Santorini, and for a brief period in Denmark and England. “All Jack ever wanted to know was that he was awake—that the trees in bloom were almond trees—and to walk down the road to get breakfast,” Gregg, who remains close to Gilbert, says. “He never cared if he was poor or had to sleep on a park bench.” After five years overseas, the couple returned to San Francisco, where they separated. Gilbert soon met and married Michiko Nogami, a sculptor twenty-one years younger than him. They settled in Japan and Gilbert taught at Rikkyo University until 1975, when he was appointed chief lecturer on American literature for the U.S. State Department and he embarked with Nogami on a fifteen-country tour. In 1982, at the insistence of his friend and editor Gordon Lish, Gilbert published a second book, Monolithos. That same year, Nogami died of cancer. She was thirty-six. Gilbert published a series of poems dedicated to her in a memorial chapbook, Kochan, and then, again, went silent—this time for a decade, during which he lived intermittently in Northampton, Massachusetts; San Francisco; and Florida.

The speaker in the poems of Gilbert’s third collection, The Great Fires: Poems, 1982–1992, often asks to be given a second chance: “Let me fall / in love one last time, I beg them. / Teach me mortality, frighten me / into the present. Help me to find / the heft of these days.” (Paris Review)