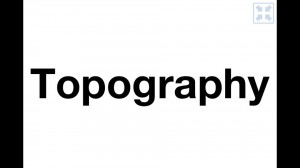 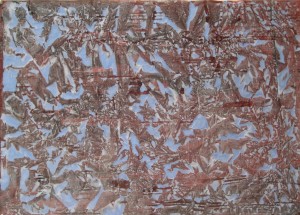 Recalled from memory, Silent Topography are painted aerial views of land and water formations observed on transcontinental flights between Europe and the West Coast of the United States.

A Trautwein such as “Frozen Blue” hints at his process. It involves crumpling and flattening found paper – in many cases old airport blueprints – then coating and flooding the sheet with acrylic to produce a sort of relief-map-like skin.
Echoes abound of an earlier generation’s more rugged exercises in color field abstraction. I think particularly of the turn-of-the-’70s unframed soaked paper abstractions of Manny Farber (1917-2008).
Yet Trautwein’s works’ illegibility as imagery does more than frustrate. It calls up the anxious uncertainty that attends our inability to read satellite imagery of the Earth.
Almost offhand, it seems, Trautwein aligns the inscrutability of certain scientific imaging with that of his paintings and with our incapacity to recognize in everyday life the signs of snowballing ecological calamity. Or rather, he relies on us to do that. And once the possibility comes to mind, resisting it feels like denial. 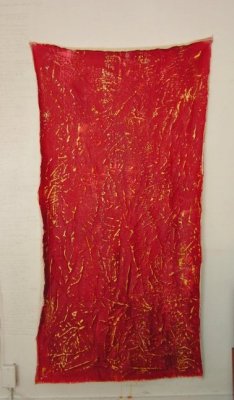 (photo by Fung Lin Hall -This was taken in his apartment. He explained that this painting was the prototype for the new work.)

See Jurgen with Daisy and Spike in 2008 here.