(DANIEL REV.BERRIGAN read two poems at . meeting In the Immaculate Conception Churchmen, then warned that the United States Is “being governed by wounded leaden.)

Protest against the Vietnam war..Berrigan, his brother Josephite priest Philip Berrigan, and Trappist monk Thomas Merton founded an interfaith coalition against the Vietnam War, and wrote letters to major newspapers arguing for an end to the war. In 1967, Daniel and Phillip were arrested for pouring blood on draft records as part of the Baltimore Four. Phillip was sentenced to six years in prison for defacing government property. This, and his belief that his support of prisoners of war during the war was not acknowledged and appreciated, further radicalized Berrigan against the United States government.

Berrigan traveled to Hanoi with Howard Zinn during the Tet Offensive in January 1968 to “receive” three American airmen, the first American POWs released by the North Vietnamese since the U.S. bombing of that nation had begun.

The Church should be making art not just cover bands. 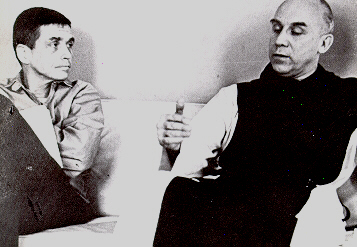 Father Berrigan said that coaching the film’s stars, Robert De Niro and Jeremy Irons, on their roles as priests had been like working on two different planets. Irons plays the head of the mission and De Niro portrays an ex- mercenary and slave trader who becomes a priest.

“Irons is more of a method actor,” said Father Berrigan. “He wanted to get inside the thinking of a Jesuit. I told him the only thing to do was to fast. He and I spent a day without food or water, and Irons frequently went off my himself to meditate.

“De Niro is a natural genius. All he wanted to do was question me for hours about being a priest.”

He also had a way of popping up in the wider culture: as the “radical priest” in Paul Simon’s song “Me and Julio Down by the Schoolyard”; as inspiration for the character Father Corrigan in Colum McCann’s 2009 novel, “Let the Great World Spin.” He even had a small movie role, appearing as a Jesuit priest in “The Mission” in 1989.

Looking Back In Gratitude

On my return to America House after the interview, I looked up the poem in the June 13, 1942, issue; it is called “Storm-Song,” an ode to the Virgin Mary. A decade or so later, an editor at Macmillan who had heard about Berrigan’s poetry asked him for a collection of his poems. He told Berrigan that he would give it to the “toughest reader” at Macmillan; and if the report was good, “we’ll publish it.” That reader turned out to be Marianne Moore, a highly regarded poet, who gave the manuscript a glowing report. It led to the publication in 1953 of Berrigan’s first book of poetry, Time Without Number, which won the Lamont Poetry Prize in 1957.