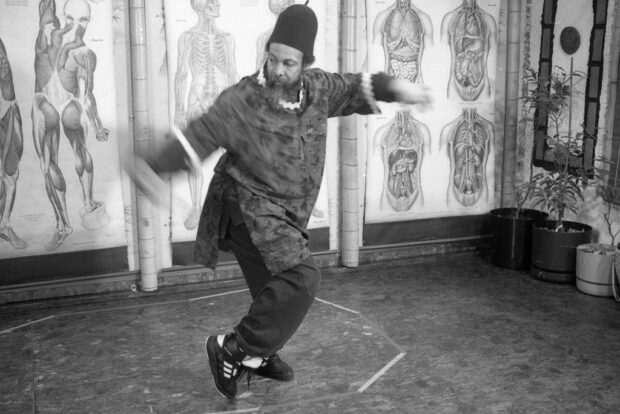 Milford Graves (August 20, 1941 – February 12, 2021) was an American jazz drummer, percussionist, Professor Emeritus of Music,[4][5] researcher/inventor,[6][7] visual artist/sculptor,[8][9][10][11] gardener/herbalist,[12] [13] and martial artist.[14][15] Graves is noteworthy for his early avant-garde contributions in the 1960s with Paul Bley, Albert Ayler, and the New York Art Quartet, and is considered to be a free jazz pioneer, liberating percussion from its timekeeping role. The composer and saxophonist John Zorn referred to Graves as “basically a 20th-century shaman.

Only two weeks ago did “Milford Graves: A Mind-Body Deal,” a major exhibition of his work at the Philadelphia Institute of Contemporary Art, draw to a close after a five-month run.

Pioneering Drummer and Polymath dies at 79

As a young drummer, Milford performed at John Coltrane’s funeral and led successful Latin music combos, drawing on his Afro-Caribbean roots. When he was barely old enough to vote, his life had taken off in a half-dozen different directions that led to revolutions in music, activism, medicine, botany, and even martial arts. He led the charge in bringing the drums out from the back of the bandstand, to a position equal with the “melodic” instruments. An anchor in the New York Art Quartet with Amiri Baraka, he was also active in the collective-bargaining movement of the Jazz Composers Guild. At the same time, he began his training as a cardiac technician with zeal; he invented a martial art form called Yara based on the movements of the Praying Mantis, boxing, West African ritual dance, and Lindy Hop; and he had an abiding interest in botany and herbology, inherited from his grandmother. By the time he began his nearly 40-year career at Bennington College, as a professor of music and holistic medicine, his fecund intellect had begun to explore radical connections between rhythm and the universe: in music, in movement, in healing, in the subatomic, in the activity of the heart and other organs.