Phillip Petit – Walking in the Clouds 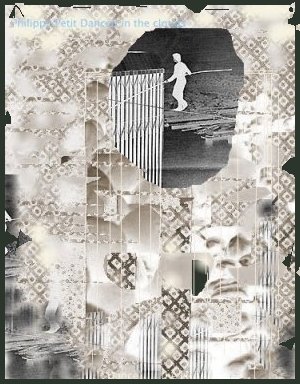 Digital image Aug 7, 2005 ( made it this morning with 2 coffees in between)
Digital photo collage dedicated to all street artists and poets.

The miraculous walk of TWC started with a tooth ache.
“The adventure of the World Trade Center begins with the first appearance of such thoughts, in a dentist’s waiting room in Paris. I am barely eighteen years old. ”

Stepping Into the Void
It took all night to complete the rigging, securing the steel cable a quarter of a mile in the sky across the 130-foot gap separating the towers. Wall Street was just beginning to come to life when, at a little past seven on the morning of August 7, 1974, Philippe Petit stepped onto the wire stretched out across the void.

Spellbinding
Philippe Petit On the street below, people stopped in their tracks — first by the tens, then by the hundreds and thousands — staring up in wonder and disbelief at the tiny figure walking on air between the towers. Sgt. Charles Daniels of the Port Authority Police Department, dispatched to the roof to bring Petit down, looked on in helpless amazement. “I observed the tightrope ‘dancer’ — because you couldn’t call him a ‘walker’ — approximately halfway between the two towers,” he later reported. “And upon seeing us he started to smile and laugh and he started going into a dancing routine on the high wire… And when he got to the building we asked him to get off the high wire but instead he turned around and ran back out into the middle… He was bouncing up and down. His feet were actually leaving the wire and then he would resettle back on the wire again… Unbelievable really…. [E]verybody was spellbound in the watching of it.” (Via)

Marlon Brando invited Philippe at his workshop, from here.
(This info will be filed to Marlon did this and Marlon did that collection )

Summer reading for kids:
The Man Who Walked Between the Towers

Back to Ephemeral Cities