Raise the Red Lantern & Mosuo Women – A Meditation on Contrast

“Saturated in hothouse colors, the three-act “Lantern” is an intense dance-theater version of the multi-award-winning film by Chinese auteur Zhang Yimou (“Hero,” “House of Flying Daggers”). The stage version is as lush and fluidly cinematic as Zhang’s — which, ironically, was banned in China when it was released in 1991.” (LA Times) 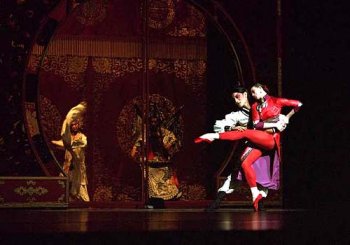 “Raise the Red Lantern is now a “Chinese Ballet making an American premiere this month in Berkeley and will be also at the Orange County Performing Arts Center for six performances beginning Tuesday. (The company then goes to the Kennedy Center in Washington, D.C., and the Brooklyn Academy of Music in New York.)
“Having seen and admired the film of the same name, I have to report that the ballet is entirely different and only the theme of female subjugation remains” (from past review when it showcased in England)

The two images from BBC.

Now read Mr. Zhang Jia in a comment to the blog Peking Duck referring to this same article.
“A huge fuss is made of the supposedly “matriarchal” Mosuo who live around Lugu Lake. The Mosuo were just one of a whole patchwork of local ethnic groups who had adapted in different ways to their environment. They mingled with Tibetans who practised polyandry [several brothers, one wife] and Han Chinese who still practise polygamy with their Da Laopo and Xiao Laopo. The Mosuo were a lot more than just a matriarchal society: to label them as some unique sexual social group is to misrepresent them as freaks. Unfortunately, they have attracted the attention of prurient tour group visitors who come thinking that they will be able to partake of casual sex in the name of a “walking marriage”.
If you want to read more about the traditional mix of Mongols, Mosuo, Pumi, Naxi and Tibetans in this area, try:
In the Footsteps of Joseph Rock

Edge on Dan Sperber talking about Anthropology.
“Anthropologists started studying themselves and trying to reflect on their own situation. It was a kind of reflective anthropology, which had a number of interesting aspects. I certainly don’t think it was useless although it became a bit obsessive. Parallel to these developments, were the post-structuralist and then post-modernist movements in the humanities and the social sciences, the development of “cultural studies,” and many anthropologists felt at ease in these movements. This produced a new kind of discourse, taking the study of other cultures as much as a pretext as a subject matter to be investigated in a standard scholarly manner. Again, some of the products of this appraoch are of genuine interest, but on the whole more harm has been done than good.”