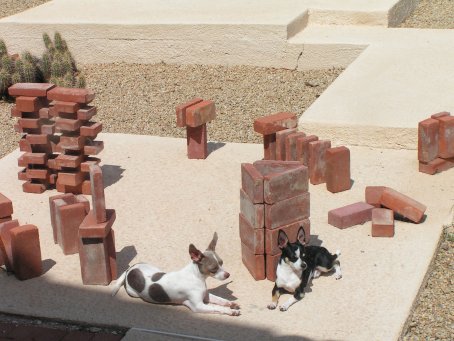 sitting among the brick installation for dummies.

Daisy and Spike sunning on their favorite spot and Coyotes in the desert mountains salivating outside the fence.
Silence of the Chihuahua 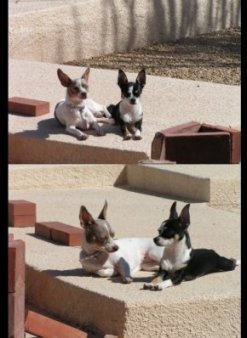 Here are some dog related trivia.
Stay away from this film if you love dogs. “Address Unknown” – Kim Ki Duk’s brutal film depicts Korea after the Korean war.

Nora Inu (Stray Dog) by Kurosawa
During the opening credits, there is footage of a panting dog. However, when American censors saw the footage, they assumed that the dog had been harmed. This run-in with American censors caused Kurosawa to remark that this was the only time he wished Japan had not lost WWII.

If only the real criminals get busted.

“All knowledge, the totality of all questions and answers,
is contained in the dog.”
– Franz Kafka – Investigations of the dog

Johannes Kepler saw himself as a hapless lap dog.

That man has in every way a dog-like nature. His appearance is that of a little lap dog. . . . He liked gnawing bones and dry crusts of bread, and was so greedy that whatever his eyes chanced on he grabbed. His habits were similar. He continually sought the good will of others, was dependent on others for everything, ministered to their wishes . . . and was anxious to get back into their favor. He is bored with conversation, but greets visitors just like a little dog; yet when the least thing is snatched away from him, he flares up and growls. He tenaciously persecutes wrongdoers–that is, he barks at them. He is malicious and bites people with his sarcasm. He hates many people exceedingly and they avoid him, but his masters are fond of him. His recklessness knows no limits . . . yet he takes good care of his life. In this man there are two opposite tendencies: always to regret any wasted time, and always to waste it willingly. . . . Since his caution with money kept him away from play, he often played with himself. His miserliness did not aim at acquiring riches, but at removing his fear of poverty–although, perhaps avarice results from an excess of this fear.

Kepler’s quotations in this chapter are taken from Arthur Koestler’s classic, The Watershed: A Biography of Johannes Kepler (New York: Anchor Books, 1960).