The Shock of the New (via Ubu) 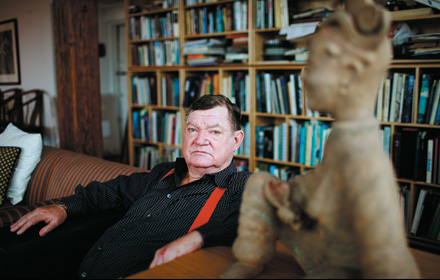 What he really detested was mannerism, in all its guises, whether the mannerism was the Italian kind that had to be cured by Caravaggio or of the postmodern kind that had yet to be cured at all. If this left him blind to the virtues that mannerism may contain—elliptical thought, the tangle of reference, stylishness—well, who would not want to be in a minority clamoring for truth and passion in a mannerist age?

will always be grateful, warily, for the blustery yet brilliant arrogance of Robert Hughes; though he clearly abhorred most contemporary (esp. post-modernist) art, his magisterial TV series “The Shock of the New” abounded with gems, such as “One of the effects of today’s museums – with their lovely white walls and their feeling of a perpetual present – is to make art seem newer than it actually is.”

Germaine Greer Note to Robert Hughes: Bob, dear, Damien Hirst is just one of many artists you don’t get

His memoir – Things I didn’t know