Mr. Holder directed a dance troupe from his native Trinidad and Tobago, danced on Broadway and at the Metropolitan Opera and won Tony Awards in 1975 for direction of a musical and costume design for “The Wiz,” a rollicking, all-black version of “The Wizard of Oz.” His choreography was in the repertory of the Alvin Ailey American Dance Theater and the Dance Theater of Harlem. He acted onstage and in films and was an accomplished painter, photographer and sculptor whose works have been shown in galleries and museums. He published a cookbook. 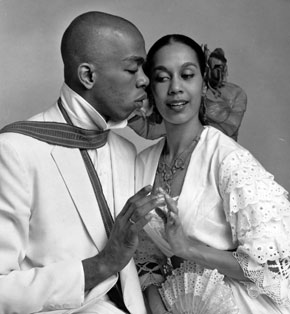 This lavish ballet choreographed, composed and designed by Geoffrey Holder depicts real and imagined events in the life of the renowned Haitian painter, Hector Hyppolite. The goddess Erzulie and St. John the Baptist appear to the central character in a vision, inspiring his vivid, exotic illustrations of the African gods and goddesses that populate Holder’s mystical theater and dance drama.