Buck Henry, Left to Join Bowie in Heaven on his Birthday

Buck Henry as Oliver Farnsworth from The Man Who Fell to Earth)
Buck Henry passed away on the anniversay of David Bowie’s birthday Jan 8.

He was twice nominated for an Academy Award, in 1968 for Best Adapted Screenplay for The Graduate and in 1979 for Best Director for Heaven Can Wait alongside Warren Beatty. His long career began on television with work on shows with Steve Allen in The New Steve Allen Show (1961). He went on to co-create Get Smart (1965-1970) with Mel Brooks, and hosted Saturday Night Live 10 times from 1976 to 1980. He later guest starred in shows such as Murphy Brown, Will & Grace, and 30 Rock.

the master of despair whose comedies seduced Hollywood
He helped shape one of the most revolutionary films of the 1960s (The Graduate), co-wrote one of the funniest of all time (What’s Up, Doc?) and scripted the movie that became the springboard for Nicole Kidman’s career (To Die For). 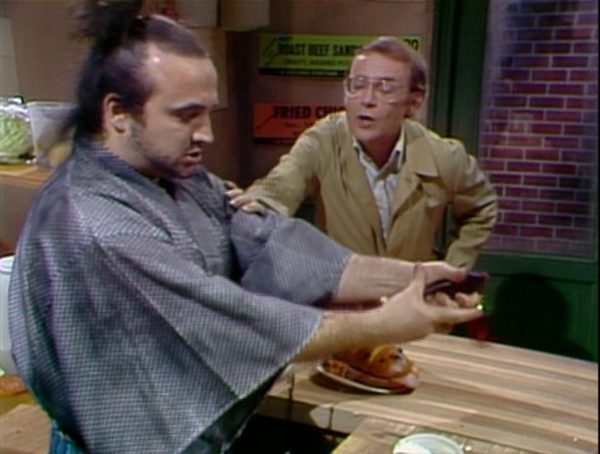 During the October 30, 1976, episode, Buck Henry was injured in the forehead by John Belushi’s katana in the samurai sketch. Henry’s head began to bleed and he was forced to wear a large bandage on his forehead for the rest of the show. As a gag, the members of the SNL cast each wore a bandage on their foreheads as well.