The Passing of Janet Malcolm – The Author of the Journalist 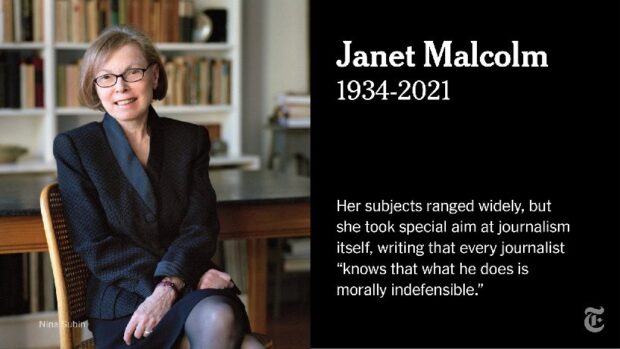 Janet Clara Malcolm was an American writer, journalist on staff at The New Yorker magazine, and collagist. She was the author of Psychoanalysis: The Impossible Profession, In the Freud Archives, and The Journalist and the Murderer, among other books.
(Wikipedia)

“New Yorker writer, whose scepticism about her trade brought her both praise and blame, was also famed for studies of psychoanalysis and Sylvia Plath”

Her most consistent modus operandi was to obscure and complicate

Who will inherit the secrets of Sigmund Freud? Who will protect his reputation? Who may destroy it? Janet Malcolm’s investigation into the personalities who clash over Freud’s legacy has become a celebrated story of seduction and betrayal, love and hatred, fantasy and reality. It is both a comedy and a tragedy. Malcolm’s cast of characters includes K. R. Eissler, a venerable psychoanalyst and keeper of the Freud flame; Jeffrey Mason, a flamboyant Sanskrit scholar and virulent anti-Freudian; and Peter Swales, a former assistant to the Rolling Stones and indefatigable researcher. Each of them thinks they know the truth about Freud, and each needs the help of the other. Malcolm endeavours to untangle the causes of their rivalry and soured friendships, while the flaws and mysteries of Freud’s early work tower in the background.

Re: Masson vs Malcolm

When it was published, Masson, the former project director of the archives, filed a $10m libel lawsuit, claiming that Malcolm had fabricated several quotes attributed to him. Though Malcolm was unable to provide proof of the quotes, after a decade of proceedings, a jury finally decided in Malcolm’s favour in 1994. Though Malcolm later claimed she had found a misplaced notebook containing some of the quotes, the case shadowed her for years, with journalists voicing scepticism at her methods.