She Bear at the FDIC 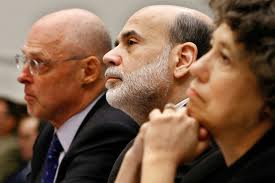 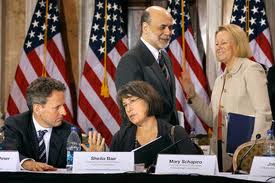 There were four central regulatory players in the great financial crisis of 2008; Ben Bernanke of the Fed, Hank Paulson of Treasury, Tim Geithner of the New York Fed and Obama’s Treasury secretary, and Sheila Bair of the FDIC. Paulson left Treasury at the end of W’s term and wrote his account of the crisis which this reader has not read. Bair left the FDIC in 2011 and this is her account. Geithner is leaving the Obama administration and will no doubt give us his account. We will have to wait for Bernanke to leave the Fed for his account.

We previously reviewed the Suskind book which featured Geithner ignoring an order from Obama to come up with a plan to break up Citigroup ( Scamming the President ). Bair recalls the meeting in question where the breakup of Citibank is discussed with the President: “Tim seemed to view his job as protecting Citigroup from me, when he should have been worried about protecting the taxpayers from Citi.” Bair says she only learned that Summers was in favor of breaking up Citigroup after reading Suskind’s book. Had she known at the time, she could have insisted that Summers arrange another meeting with the President where she could discuss and advocate using FDIC to resolve Citigroup. She never doubted this breakup could have been done.

This is the first time we learn about the “systemic risk exception” where super majorities of the Fed and FDIC boards declare that putting an institution into an FDIC type resolution would cause “systemic ramifications”. This effectively means that Treasury and the President himself must approve the resolution. Bair says of the NY Fed invoking the exception for Bear Stearns:

In fact, prior to the 2008 financial crisis, the FDIC had never invoked the systemic risk exception. But here we had the NY Fed (Geithner) going out on its own and deciding to bail out a relatively small investment bank, a perimeter player at best…I was concerned about the precedent the NY Fed was setting. 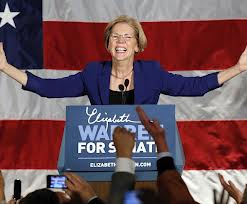 As Suskind relates, both Geithner and Summers went to great lengths to control access to Obama and the administration had an all boys club atmosphere. Christina Romer, nominal head of the Counsel of Economic Advisers, left the administration early and gets one brief mention in Bair’s account. Bair did have a close working relationship with Elizabeth Warren, newly elected Senator from Massachusetts in Ted Kennedy’s old seat, and Bair still has high hopes for the Consumer Financial Protection Bureau. 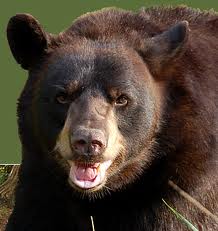 Bair is a tough, no nonsense, plain speaking advocate of the public interest. Her fierce and protective support of the FDIC against all critics led her staff to call her “She Bear”. When she arrived at the FDIC in 2006, moral was low and the agency hadn’t closed a bank in three years. The black clouds were on the horizon and the FDIC through its own and other regulators examinations had probably the clearest picture of the looming catastrophe. She launched a major offensive to educate the public and woo the media to the role of the FDIC, the mechanisms of the bank resolution process, and reassure the public that insured bank accounts were perfectly safe. 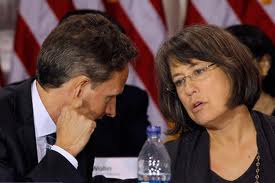 Almost immediately the FDIC was overrun with bank failures; Wachovia, Countrywide, Indymac, Washington Mutual and others. She ran into her first major conflict with Geithner who wanted his client Citigroup, despite their dismal financial condition to acquire Wachovia to add their FDIC insured deposits to Citigroups small deposits. Geithner was furious when Bair continued to press Wells Fargo to purchase Wachovia, which they did without any government assistance or guarantees. Geithner doesn’t fare well in Bair’s account in this book.

Bair does a good job explaining the complex structure of financial regulation in this country. The Fed has certain regulatory functions; the FDIC domain covers any institution with insured deposits; Treasury houses two regulatory agencies, the OCC for mega banks; and the OTS for the thrifts including WAMU, Countrywide, and Golden West. While the Fed and FDIC are more independent, the Treasury is highly politicized and has been under the sway of the financial industry for some time. Citigroup’s Bob Rubin (Clinton’s first Treasury Secretary) mentored both Larry Summers and Tim Geithner and it was under Clinton that Glass-Steagall was repealed and Derivatives declared free from all regulation. And Hank Paulson was former CEO at Goldman-Sachs. The SEC and CFTC are separate and are dependent on annual budget allocations.

When Senator Dodge advocated creating a single unified regulatory agency, Bair talked him out of it because she feared a single agency would more easily fall under the control of the financial industry and become a super OCC. Besides her wars with the Citigroup dominated Geithner, Bair had continuing problems with the OCC, with John Dugan and John Walsh, comptrollers of the currency, and OTS’s John Reich, who opposed Chase’s purchase of WAMU, Reich’s last bank. The OTS is now abolished. None of these were advocating for main street and the public interest.

Bair strongly advocated using the government through the resolution process to clean up the toxic mortgage backed securities. The FDIC successfully demonstrated simplified methods to modify mortgages en-mass during the cleanup of the thrifts. Bair was a consistent advocate for loan modification as a way to keep people in their homes and minimize the overall losses to the industry and government. She called TARP, which Paulson sold as a fund to buy toxic assets, then used it to bail out the banks and wall street with capital infusions, a case of bait and switch. She explained some of the reasons for the failure of loan modification programs. Mortgages were lumped into securities which were sold with banks providing loan servicing for low flat fees. This meant the banks were understaffed, under trained, and unsupervised. Breaking the securities into tranches meant that holders of the “safest” tranches would not be hurt financially until perhaps 20% of the mortgages defaulted so were incentivized to prefer foreclosure to restructuring loans. When robo signing was uncovered where single bank workers were fraudulently claiming to have examined the loans being foreclosed the issue moved to the front burner but no effective action resulted. Banks still had separate groups working simultaneously on foreclosure and modification of the same mortgage with customers being approved for modification at the same time they are being evicted. To this date, loan modifications are woefully inadequate and the bulk of toxic assets are still looming.

During the debate on Dodge-Frank, there was considerable discussion of FDIC style regulatory resolution verses bankruptcy. Bair uses the infamous case of the Lehman Brothers bankruptcy to prove her case that regulatory resolution is far better. Legal and other fees topped $1.5 billion and to date, creditors have recovered 21 cents on the dollar. The Lehman brand is dead and all employees lost their jobs. An FDIC style resolution results in an instant solution, preserving the brand and jobs. Her staff estimated that an FDIC resolution would have recovered 97 cents on the dollar at Lehman.

Bair is generally positive on Dodge-Frank but worries that the industry will continue to attack and modify the measures. Much of the effectiveness of Dodge-Frank will depend on the regulatory implementation and the jury is still out on much of the new complex legislation.

Bair complains that Sorkin in his book Too Big To Fail and in his columns failed to contact the FDIC to get their perspective and thus misrepresented FDIC positions and actions.

Bair spends considerable time on the Basel II accords which greatly reduced capital requirements for banks allowing the European banks to load up on sovereign debt from Greece, Italy, Spain, and Portugal. Much of the current European financial crisis is attributable directly to Basel II. Bair with a little help from the Fed was able to prevent the US from adopting Basel II. Bair then pushed Basel III to greatly increase capital requirements and to require mega banks to have even higher (9.5%) capital reserves. 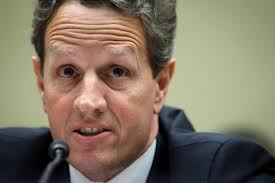 Bair notes that the Barclay misconduct in the Libor interest rate fixing scandal from mid 2005 to early 2009 took place at Barclay’s NY trading desk which was subject to Geithner’s NY Fed. The investigation was conducted jointly by the CFTC, UK authorities and the Justice Department. The investigation did not involve the NY Fed. During his appointment hearings for Treasury, Geithner proudly stated “I have never been a regulator, for better or worse.” For once he seems to have been telling the truth. Unfortunately for us, regulating was his Fed job.

Bair is very disappointed in Obama and hopes he will appoint better people in his next administration. The FDIC currently has no head. Would it be too much to hope that Obama might appoint audacious Bair to Treasury?