Deprecated: Return type of HM\BackUpWordPress\CleanUpIterator::accept() should either be compatible with FilterIterator::accept(): bool, or the #[\ReturnTypeWillChange] attribute should be used to temporarily suppress the notice in /home/mutanteg/public_html/vitro-nasu/wp-content/plugins/backupwordpress/classes/class-path.php on line 456
 Blowing the Blues Away – Vitro Nasu
Previous
Next

Blowing the Blues Away

Horace Silver’s autobiography is out.

Listen to these tracks from his homepage.
1 Nica’s Dream (Horace-Scope)
2 Strollin’ (Horace-Scope)
3 Filthy McNasty (Doin’ The Thing)
4 Sister Sadie (Blowin’ The Blues Away)

Miles Davis, J. Coltrane Mingus, Theloneous Monk are not the only Jazz greats, there many many more.

Sonny Rollins is alive and kicking, visit his homepage. He was the first one to show up with the Mohican haircut and did zen meditation on the Brooklyn Bridge.

Today’s players are still dealing with Sonny Rollins’ contribution to the idiom, plundering his recordings for ideas and insights. He was one of the first to appropriate a West Indian heritage and music into mainstream jazz, which for me is very significant. His political consciousness and daring I also found inspiring – for example, recording The Freedom Suite in 1958 with Max Roach during the civil rights protests. He’s completely at one with his instrument. And few people have been able to make triplets and eighth-notes swing harder. (From the Guardian)

Ornette Coleman is touring in Japan. (To be honest, I have not been keeping up, was surprised to find him alive and working.)

One of the ultimate American accolades, the MacArthur Foundation “genius” grant, was awarded to Coleman in 1994. In general, rather than simple concerts, Coleman’s performances had by now become big multimedia events that both reflected and impacted on the host town’s community, lasting for several nights at a significant location. (via)

Here was an innovator who died young. 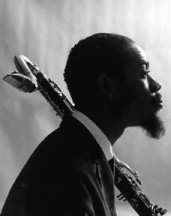