There is something about his work, something so delicate and instinctive and mysterious, but also so direct and simple and intense, that talking about it will not help anyone to see his paintings better. From I Hate Painting – Guardian, Colm Toibin’s interview)

But I work in a country where I think that if I didn’t talk about my work at all people might not even bother to look at it.
Howard Hodgkin

A perfect example of Hodgkin’s sharp personality is the small You Are My Sunshine, which, like a sycophant’s true feelings, contains a snide black core within effusive, almost hyper orange and yellow. (The Color of Turmoil by Ana Finel Honigman)

Colour is, of course, what characterises a Hodgkin painting. Seductive and jewel-like, it is never simply there for its own sake. In this he belongs to a distinctively European tradition, with the French post-impressionists Édouard Vuillard and Pierre Bonnard, and with Henri Matisse. As Susan Sontag pointed out, he is mindful of the ancient quarrel between Michelangelo’s preference for disegno over Titian’s for colore. It is as though he wants, she said, “to give colore its most sumptuous exclusive victory”. (Living Color – Sue Hubbard)

How we work: Howard Hodgkin, artist
Hodgkin paints fairly reclusively, on several paintings in parallel, most of which take years to complete. (from Rodcorp)

Bringing together 60 of his evocative and vibrant paintings from the 1950s to the present day, the exhibition provides a rare opportunity to view new work in the context of earlier decades.
June 14 – September 10, 2006 at Tate.
More images from here.

Do you have a Hodgkin painting? Mine is in the bathroom on top of small stack of Japanese books – two by Kawabata Yasunari. I was not thinking of Hodgkin when I painted this. 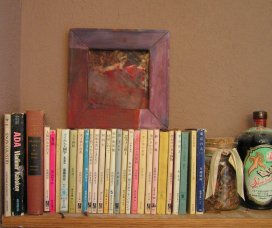