“Despite the fierce look, Mayakovsky does not look authoritarian, he appears, instead, defenceless. It is like a still from an American movie rather than a Russian one, a major criminal caught in the lens of the law. He is pictured against a wall, as if he were Public Enemy Number One, or, rather, the enemy cornered just before his perfectly legal street execution, with no trial. He is not holding a weapon, but some sheets of paper, and that is the only thing that seems out of keeping with his otherwise harmonious figure, unless the sheets of paper are not, as one fears and regrets, poems, but pamphlets he was reading to a crowd from a platform. He is an ill-tempered or perhaps a hounded man, but, as revealed by that determinedly wide stance, unwilling to give in or surrender even if they riddle him with bullets. The most striking and most resolute thing of all, however, are his shoes, so remarkable that they slightly invade the turn-ups of his beautifully pressed trousers: one could not give up such shoes even at the moment of death.” 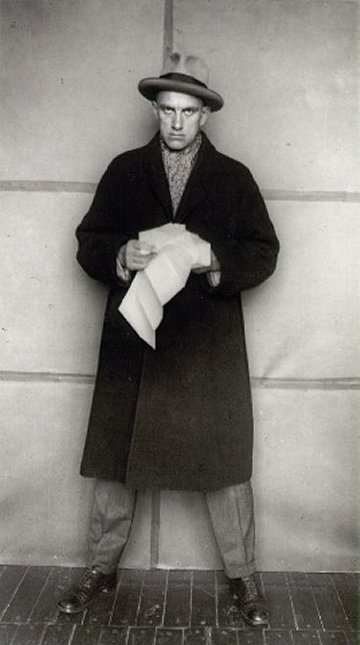 photo by Alexander Rodchenko
Prefer Not to Tumblr..