“Harriet Andersson in Monika is one of the miracles of cinema. She embodies once and for all youth, beauty, freedom, rebellion. I see her as pure poetry. When I was shooting Cold Water I was inspired by one shot in Monika, when she runs holding the piece of meat she’s just stolen.” Olivier Assayas from Bampfa 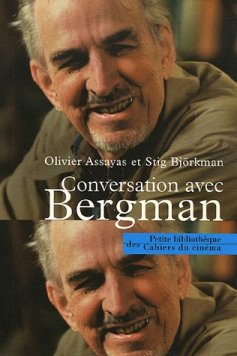 on Bergman (I don’t think this book is translated into English.)

When I did Conversations with Bergman it was an extraordinary experience for a young film-maker to be confronted with one of the great masters. (via)

For me, the defining moment with Bergman was when I made my second film, A Winter’s Child, and realised that what interested me in film was filming actors. I became fascinated with the process of what was happening on the face. I had a vague notion that this had something to do with Bergman(via)

Assayas on Bergman’s The Magician

To me, the Bergman style began to gel with Summer with Monika. Before that, the films he was making were like very good American films. But there seemed to be some kind of break with Monika, and after that it drifted into the emergence of that great poetic style. Woody Allen, Back from the Cold, Guardian.

Harriet Andersson and I have worked together all through the years. She is unusually strong but vulnerable person, with a streak of brilliance in her gifts. Her relationship to the camera is straight and sensual. She is also technically superb and can move like lightening from the most powerful empathy to conveying emotions: her humour is astringent but never cynical: she is a lovely person and one of my dearest friends. – The Magic Lantern, Ingmar Bergman page 170

Godard said that “It is the saddest shot in the history of the cinema.” And was truly a strange and risky shot, but the result is stupendous: what a look, at the same time mysterious and full of meaning, clear and obscure, straight to the camera: outrageous. (Jose Monteiro)