In Memory of My Feelings – Frank O’Hara

Frank O’Hara as New York Poet, Museum Modern Art Curator, Art News critic, occupied a central stage in the 50’s to 60’s art world. Larry Rivers described him as a professional hand holder and his fee was love.
Both NYTimes and wikipedia records June 27 as Frank O’Hara’s birthday. His actual birthday was March 27. He was an Aries and not a Cancer. (via “The Life and Times of Frank O’Hara by Brad Gooch). Poems he wrote about his birthday only reinforced the misinformation created by his parents to cover up the fact he was conceived before their marriage. 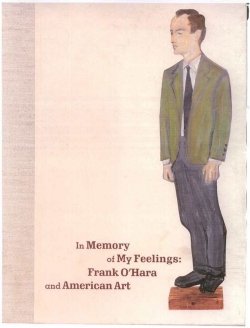 (via) By Alex Katz

In Memory of My Feelings

And now it is the serpent’s turn.
I am not quite you, but almost the opposite of visionary.
You are coiled around the central figure,
the heart
that bubbles with red ghosts, since to move is to love
and the scrutiny of all things is syllogistic,
the startled eyes of the dikdik, the bush full of white flags
fleeing a hunter,
which is our democracy
but the prey
is always fragile and like smething, as a seashell can be
a great Courbet, if it wishes. To bend the ear of the outer world.

When O’Hara wrote this poem he never worried about democracy in America, but words like ” the bush full of white flags fleeing a hunter, which is our demorcracy ….” pop out with strange effect for today’s readers.

“He was inspired and energized by New York City as other poets have been inspired and energized by nature. In Meditations he wrote, “I can’t even enjoy a blade of grass unless I know there’s a subway handy, or a record store or some other sign that people do not totally regret life.” (These words were inscribed on the railings at the Battery Park alongside Walt Whitman’s poem) He described his work as “I do this I do that” poetry because his poems often read like entries in a diary, as in this line from ” The Day Lady Died“: “it is 1959 and I go get a shoeshine.”
“He was our Apollinaire.” Philip Guston said at Frank’s funeral. Edward Gorey who was his roommate at Harvard said that he was living on the edge. Like Pasolini they both received injuries on the beach, though O’Hara’s was a freak accident and not murder. 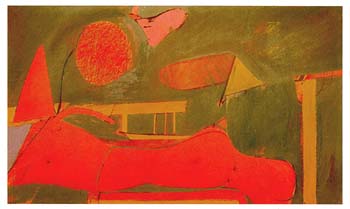 “Well, I have my beautiful de Kooning
to aspire to. I think it has an orange
bed in it, more than the ear can hold ” (via)

O’Hara died of injuries he received when he was hit by a vehicle on the beach at Fire Island. (via)
De Kooning,who had arrived with a big checkbook offering to pay for everything, found Frank O’Hara in great pain….”De Kooning came out crying” recalls a friend. “I ‘ve never seen him like that , just weeping. When we went in we realized Frank was not going to live. He looked like a Francis Bacon.” (page 463, The Life and Times of Frank O’Hara by Brad Gooch)

Autobiographia Literaria and many more famous poems, in here, for funny read Lines for the Fortune Cookies.

“On Rachmaninoff’s Birthday” is featured at Point and Counterpoint with Frank O’Hara, Part III (Ting Alley)