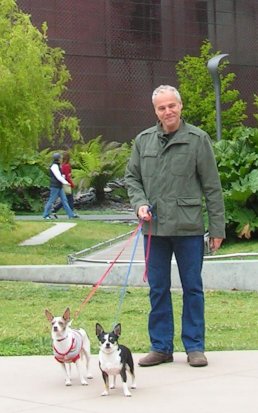 with De Young Museum.
San Francisco was cold as you can see. Daisy has a sweater and Jurgen is wearing a jacket.

Jurgen has a blog – it’s called JTwine – Now.
We saw Hitler Porcelain together. He mentioned bitter melon but we ate eggplant instead.

On August 1 we left Arizona, camped at Yosemite, did some wine tasting in Napa, Sonoma and Healdsburg, peeked at Duchamp Hotel, spent a nice day with Jurgen in SF and drove to LA via Big Sur.
Both Daisy and Spike loved camping, sleeping in the tent and later they learned to sniff and love Motel 6.
Duchamp Hotel would have charged $60 per pet. (Peggy Gunggenheim had great named pets and they were buried in Venice.)
More about our California trip with photos will be coming soon.