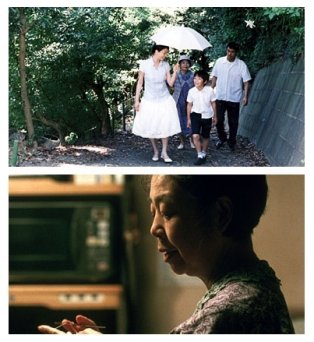 Engraved onscreen with the intense luminosity of a bright summer day, Hirokazu Kore-eda’s latest meditation on family drama is a quiet masterpiece that seems to originate from a deeply personal yet universal experience of regret. (Toronto Int’l Festival)

Still Walking conjugates the languages of poetry and documentary into a compelling account of modest joys and gentle resentments. Draped in the colours of memories that will not fade, the film keeps a slightly off-centre focus on echoes of the past, and concentrates on recording, with genuine simplicity, the mundane events of a family reunion. 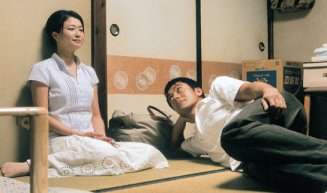 I lost track of the number of times I smiled or laughed in recognition during Hirokazu Kore-eda’s latest film entitled “Still Walking”. (A review by Bob Turnbull )

An opera was created by a Dutch composer, Michel van der Aa based on Kore-eda’s “After Life”. (Read more here)
The youtube trailer for After Life – Opera

Nobody Knows trailer (YOU – the actress who portrayed an irresponsible child mother in Nobody Knows also appears in this new film Still Walking).

Update: Hirokazu Kore-Eda’s “Still Walking,” from Japan, was selected as the best film at the Toronto International Film Festival in a poll of film critics and bloggers conducted this weekend by indieWIRE.