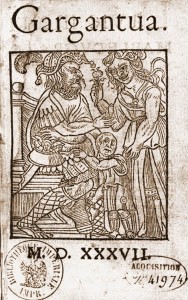 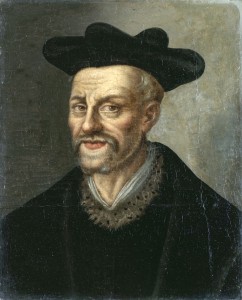 Nature abhors a vacuum.
Half the world does not know how the other half lives. – Francois Rabelais
Read more here.

Rabelais’ use of his native tongue was astoundingly original, lively, and creative. He introduced dozens of Greek, Latin, and Italian loan-words and direct translations of Greek and Latin compound words and idioms into French. He also used many dialectal forms and invented new words and metaphors, some of which have become part of the standard language and are still used today. Rabelais is arguably one of the authors who has enriched the French language in the most significant way.
His works are also known for being filled with sexual double-entendres, dirty jokes and bawdy songs that may shock even modern readers.

And one more Rabelais on (youtube) with Medieval/Renaissance music

Alfred Jarry performed from memory, hymns of Rabelais at Symbolist Rachilde’s Tuesday salons, and worked for years on an unfinished translation of Gargantua and Pantagruel.

Anatole France lectured on him in Argentina. John Cowper Powys, D. B. Wyndham-Lewis, and Lucien Febvre (one of the founders of the French historical school Annales) wrote books about him. Mikhail Bakhtin, a Russian philosopher and critic, derived his celebrated concept of the carnivalesque and grotesque body from the world of Rabelais.

Hilaire Belloc was a great admirer of Rabelais. He praised him as “at the summit” of authors of fantastic books.[14] He also wrote a short story entitled “On the Return of the Dead” in which Rabelais descended from heaven to earth in 1902 to give a lecture in praise of wine at the London School of Economics, but was instead arrested.

George Orwell was not an admirer of Rabelais. Writing in 1940, he called him “an exceptionally perverse, morbid writer, a case for psychoanalysis”.

Milan Kundera, in a 2007 article in The New Yorker, wrote: “(Rabelais) is, along with Cervantes, the founder of an entire art, the art of the novel.” (page 31). He speaks in the highest terms of Rabelais, calling him “the best”, along with Flaubert.

Rabelais was a major reference point for a few main characters (Boozing wayward monks, University Professors, and Assistants) in Robertson Davies’s novel The Rebel Angels, part of the The Cornish Trilogy. One of the main characters in the novel, Maria Theotoky, writes her PhD on the works of Rabelais, while a murder plot unfolds around a scholarly unscathed manuscript. Rabelais was also mentioned in Davies’s books The Lyre of Orpheus, and Tempest-Tost.[citation needed]