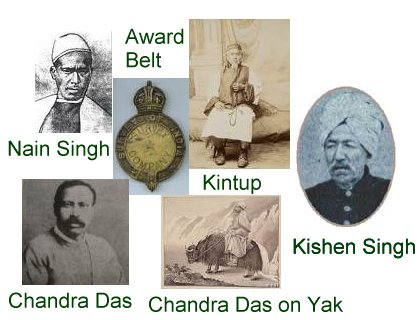 The northern boundary of South Asia is and has always been protected by a formidable barrier of mountains and ferocious tribes. This is the story of attempts by the British, primarily in the 19th Century, to learn more about the geography and trade possibilities of this fascinating region.

Knowing that white travelers could never survive in this region, the British Survey Office, located in Dehra Dun recruited and trained native spies in fine arts like learning to walk with a measured stride and counting their steps on prayer beads (modified from the normal 108 beads to 100) for measuring trekking distances; mercury thermometers and barometers for determining altitude, and sextants for measuring location.

These early 007’s were primarily gatherers of information for mapmakers, though each received a secret code name like NA, RN, PA, GK, GM, GNM, etc. They were given the honorary designation of Pundit, meaning scholarly or wise and were the model for Rudyard Kipling’s Kim.

The spies were often native and spoke the languages and were intimate with the cultures of their target territories. To avoid official discovery, they disguised themselves as religious pilgrims or occasionally native doctors. Some were lamas so the religious disguises were authentic.