Deprecated: Return type of HM\BackUpWordPress\CleanUpIterator::accept() should either be compatible with FilterIterator::accept(): bool, or the #[\ReturnTypeWillChange] attribute should be used to temporarily suppress the notice in /home/mutanteg/public_html/vitro-nasu/wp-content/plugins/backupwordpress/classes/class-path.php on line 456
 Keene Observation – Vitro Nasu
Previous
Next 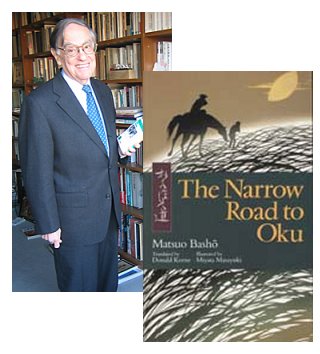 Waley had been my inspiration for years–the great translator who had rendered “The Tale of Genji” into marvellously beautiful English. He had translated not only from Japanese but also from Chinese. I also had studied Chinese along with Japanese and hoped to become the second Waley. Alas, this did not happen. The study of Japanese literature was all I could manage, and my knowledge of Chinese gradually faded away.

Yomiuri is featuring “Autobiographical Essays” by Donald Keene on weekly basis. His childhood in Brooklyn, his meeting of Russell and Forster in England and his love of Maria Callas and opera have been covered so far.

Donald Keene is a genius who has done more for Japanese literature and culture than anybody else in the world.

“Unfortunately, he is not as forthcoming as one might wish about Mishima, despite the fact that he was apparently close enough to him that one of the three ‘farewell letters’ Mishima wrote was addressed to Keene. The sections are little more than sketches, but still give a decent picture of each of the authors, with contrarian Abe especially nicely presented. Amusing side-notes include the fact that when Keene first met Abe in 1964 the Japanese writer came with an interpreter — Ono Yoko (though Keene — typically — only discovered her identity years later) ” Read more here.

Keene described Mishima as emotionally distant in private relationships. Mishima wrote everything in first draft, seldom revising. Despite his aristocratic background Mishima actually enjoyed mingling with the simple ordinary country people of Japan. Keene did his best to introduce Mishima’s works outside Japan, promoting and protecting his legacy. (Keene and Mishima were rumored to be casual lovers, or so I heard from one of his students.)

Photo of Keene and Mishima here.

“I wonder what feelings inspire a man to complain of “having nothing to do.” I am happiest when I have nothing to distract me and I am completely alone.
If a man conforms to society, his mind will be captured by the filth of the outside world, and he is easily led astray; if he mingles in society, he must be careful that his words do not offend others, and what he says will not at all be what he feels in his heart. “

In everything, no matter what it may be, uniformity is undesirable. Leaving something incomplete makes it interesting, and gives one the feeling that there is room for growth.

Short Sample Essays in Idleness translated by Keene.
In comparing Essays of Idleness to The Pillow Book of Sei Shonagon, Keene wrote:

The Pillow Book was written by a court lady who delighted in every piece of gossip that came her way, but Essays in Idleness was by a Buddhist priest who, though much concerned with things of this world, was ultimately devoted to religious truth.

One important strain in Essays in Idleness, entirely absent from the Pillow Book, is the conviction that the world is steadily growing worse. (page 854, Seeds in the Heart by Donald Keene)

Nine translations of Basho’s Oku No Hosomichi. and my spoof on Basho and the Lost Frog here.

Years ago, I have heard that Keene divides his time between Manhattan, Tuscany, Italy and Kyoto Japan. (Not sure of his current residency these days. )

Donald Keene was born on June 6th 1922. He is most likely to have a moon in Aries. Sun in Germini and Moon in Aries are energetic, courageous people, John Nash (beautiful mind mathematician) and Angelina Jolie have this combo. They are eccentric and love weird stuff. Here is the description of this combination.