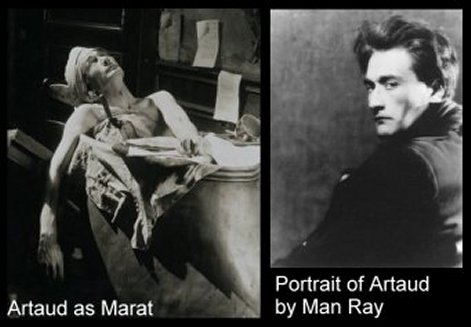 A visionary and a mystic. He saw the theatre as a ritual able to give rise to a numinous experience within the spectator.

To Have Done with the Judgement of God, a radio play by Antonin Artaud

And war is wonderful, isn’t it?
For it’s war, isn’t it, that the Americans have been preparing for
and are preparing for this way step by step.
In order to defend this senseless manufacture from all competition
that could not fail to arise on all sides,
one must have soldiers, armies, airplanes, battleships,
hence this sperm
which it seems the governments of America have had the effrontery
to think of.

In Carl Theodor Dreyer’s The Passion of Joan of Arc, Artaud acted as the monk Jean Massieu.

Derrida emphasized the
performative aspect of the work, stating
that “All of Artaud’s works participate in
an urge to DO something not just EXPRESS
something.” They “produce an event in the
act of writing and drawing … they are
events directed at an addressee.” Instead
of projecting a “French” sensibility
they, evoke an “immediately universal glosso-
poetics.” Thus countering the reductive
view that Artaud’s works are signs of
pathology, Derrida asserted that they are
“not only lucid–they illuminate us on what
it means to be dispossessed.” 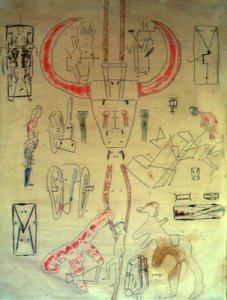 A New Scène Seen Anew:Representation and Cruelty in Derrida’s Artaud
by Colin Russell

Glossopoeia, which is neither an imitative language nor a creation of names, takes us back to the borderline of the moment when the word has not yet been born, when articulation is no longer a shout but not yet discourse, when repetition is almost impossible, and along with it, language in general: the separation of concept and sound, of signified and signifier, of the pneumatical and the grammatical, the freedom of translation and tradition, the movement of interpretation, the difference between the soul and the body, the master and the slave, God and man, author and actor. This is the eve of the origin of languages, and of the dialogue between theology and humanism whose inextinguishable reoccurence has never not been maintained by the metaphysics of Western theater. (Derrida 240)