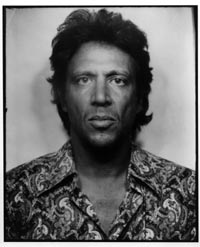 It says an American in hell.
Who is this American? He is Richard Hell or in his youth sometimes known as M’sieur Tarzan.
Hell came out with a new novel, the village voice review of Godlike is in.
Matt (pas-audela) updated the post with Richard Hell’s interview at 3am magazine.

Hell now writes film reviews on his site. His reviews are fresh and entertaining.

Speaking of entertainment let us look at another portrait as compelling as M’sieur Tarzan. 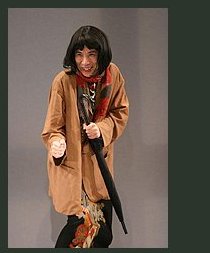 Hiroko-san is one of many personalities Issey Ogata created for his solo performance.

The westerners were introduced to Issey Ogata in Yi Yi (Edward Yang) . He almost stole the film from other fine Taiwan actors.
From Emperor Hirohito to playing a modern technocrat or sad ordinary man in Tony Takitani – Issey Ogata is a magnetic performer. Thanks to Sokurov for his patience and finding the right actor. (Unlike the team Spieldberg/Marshall for casting more worldly famous Chinese actresses for Japanese Geisha film- financial reward was their primary concern.)

“Although his face–or rather his many faces–has appeared on TV in dramas and commercials, Ogata easily vanishes into Tokyo’s crowd. “I ride the subway or train,” he says with pride, “and no one notices me.” (from here.)
A gallery of photos of his solo performance, here.