“Welcome to Johnny White’s, a New Orleans bar that has actually managed to stay open all through the Katrina disaster and has turned into a kind of community center for folks who have refused to leave the city. ” (via Sfgate) 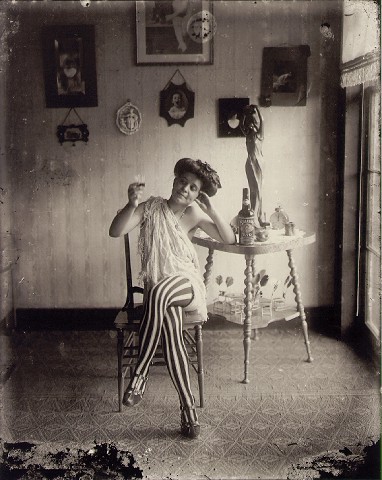 FIRST 0F ALL, the pictures are unforgettable – photography’s ultimate standard of value. And it’s not hard to see why the trove of glass negatives by a hitherto unknown photographer working in New Orleans in the early years of this century became one of the most admired recoveries in photography’s widening, ever incomplete history. (Susan Sontag on Bellocq )

13 more photographs by Bellocq from Masters of Photography

Step inside A Gallery for Fine Photography, located in an historic 19th-century building at 241 Chartres in New Orleans’ French Quarter.
Bellocq at A Gallery, here.

Luois Malle and Pretty Baby.
“Violet (Shields) is the daughter of a prostitute (Susan Sarandon) who works at one of the brothels in New Orleans’ legendary red-light district, Storyville. One day photographer Ernest Bellocq (Keith Carradine) arrives at the brothel to take photos of the prostitutes and becomes fascinated with Violet, who is fast approaching her 12th birthday and a subsequent initiation into prostitution. When her mother moves to St. Louis in search of marriage and respectability, Violet determines to marry the much older Bellocq. Malle infuses the potentially lurid subject matter with a lyrical beauty that brings humanity to his characters and story, with the assistance of a sensitive script by Polly Platt and superb cinematography by Sven Nykvist.”

My Family Can Help

“A strong, soulful, wicked, frail city” wrote Reed Johnson –
“After disaster recedes, the rebuilding will begin. Artists and others wonder: What will become of the culture?”

New Orleans is a ghost town, an occupied city, from Life in the Necropolis.

Spike Lee is headed to New Orleans to make a documentary examining how race and politics collided in aftermath of Hurricane Katrina.

The Subject Supposed to Loot and Rape:
Reality and fantasy in New Orleans by Slavoj Zizek
“New Orleans is one of those cities within the United States most heavily marked by the internal wall that separates the affluent from ghettoized blacks. And it is about those on the other side of the wall that we fantasize: More and more, they live in another world, in a blank zone that offers itself as a screen for the projection of our fears, anxieties and secret desires.”

Back to Ephemeral Cities