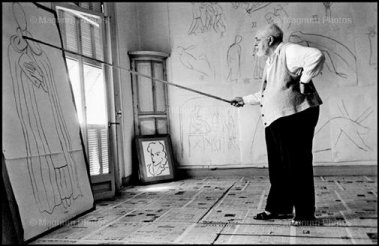 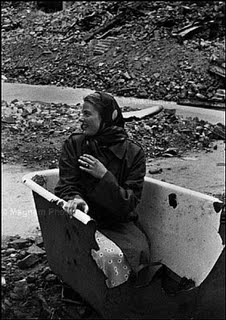 (Capa botched the original and this one by someone who took similar photo that Capa lost).

It has turned out that there was more to Ingrid Bergman and her good taste in Photography in choosing Gordon Parks to capture her life at Stromboli. (See my previous post).

Remembering that Ingrid had an affair with Robert Capa, I googled their names and came across this information.
“Her famous love affair with the war photographer, Robert Capa was the basis for Alfred Hitchcock’s Rear Window.”

How did I miss this? Wow.

“Alfred Hitchcock noticed the attraction and the tensions when Capa visited Bergman on the set of Notorious, and he used some of that mood in Rear Window.

Isabelle Rossellini is delighted and gives us the story of her mom’s affair with Capa, from here.

” In 1936, believing he needed a more striking name, he decided on the byline Robert Capa, and, with his girlfriend Gerda Taro, he made editors believe he was a famous American photographer and they paid him inflated prices.
Many myths surround the name, but the most popular is that he wanted to be confused with American film director Frank Capra. ”
Here is an outline of his life – Terror through the eys of a pacifist.

“He was also a man whose charm burned like a cigarette; a steady womanizer, beloved by men of action, soldiers, writers, hotel porters, and riffraff, too.” (from here) 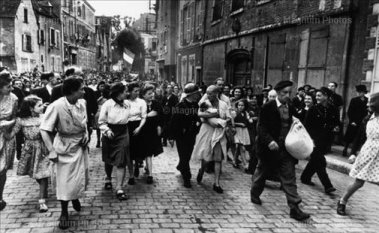 (Holding a baby fathered by Nazi soldier, a french women dishonored by her countrymen)

“Looking at the pictures, one can see he was invariably at the hottest actions, taking extraordinary risks: in Mexico, Spain, France, China or Cambodia.
His pictures display remarkable compassion for the subjects. Although he shows bodies, his shots convey the dignity, determination and fearlessness of the victims.
Perhaps this was his greatest contribution: elevating photojournalism to the highest levels of integrity, while his daredevil gambles, moving pictures and charisma made the profession glamorous. ” (via east pix.com)

D-Day Photos by Capa or Private Ryan not found

He started Magnum – his page here.