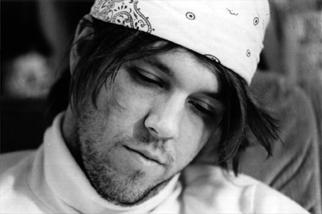 Consider the Lobster – Gourmet 2004
(Is it all right to boil a sentient creature alive just for our gustatory pleasure?” )

In person, he had a great purity. I had a sense of shame in his presence, though he was meticulous about putting people at their ease. It was the exact same purity one finds in the books: If we must say something, let’s at least only say true things.1 The principle of his fiction, as I understand it. It’s what made his books so beautiful to me, and so essential. The only exception was the math one, which I was too stupid to understand. One day, soon after it was published, David phoned up, sincerely apologetic, and said: “No, look … you don’t need anything more than high school math, that’s all I really have.” He was very funny. He was an actual genius, which is as rare in literature as being kind—and he was that, too. He was my favourite, my literary hero, I loved him and I’ll always miss him.

1 And let’s say them grammatically.
—Zadie Smith (via McSweeny )

Along with his first piece, he also sent a check, for $250. That was the craziest thing: he sent a donation with his contribution. Thus he was the first donor to the journal, though he insisted that his donation remain anonymous in that first issue. I had such a problem cashing that check; I wanted to keep it, frame it, stare at it. – Dave Eggers via McSweeny)

Obits from his colleague John Seery, and from Greencinedaily

When a famous artist commits suicide, this suicide is their final statement. Kurt Cobain, Richard Brautigan, Ernest Hemingway, Sylvia Plath, Yukio Mishima, Anne Sexton, Hunter S. Thompson and David Foster Wallace all must have understood — and may or may not have regretted — the way they were inevitably punctuating their careers. It’s changed the way we thought of the earlier artists named above, but how will it change the way we think of David Foster Wallace?

Update: Who’ll take care of his dogs? (Obit from No Trivia, via Richard Crary the Existence Machine)

[1] While going over proofs of his last published story, “Good People,” which appeared in this magazine in 2007, he wrote, “I have ended up taking more of your changes . . . than I thought at first I would. But in some cases I’ve ‘taken’ them in a sort of oblique way that’s entailed further small changes around the recommended change—most often, this has taken the form of clarifying or declumsifying a phrase or passage you’d suggested, but then finding other, more innocuous ways to clumsify or ‘voice up’ that part.” (Postcript of DFW by Deborah Treisman -New Yorker)