Deprecated: Return type of HM\BackUpWordPress\CleanUpIterator::accept() should either be compatible with FilterIterator::accept(): bool, or the #[\ReturnTypeWillChange] attribute should be used to temporarily suppress the notice in /home/mutanteg/public_html/vitro-nasu/wp-content/plugins/backupwordpress/classes/class-path.php on line 456
 Claude Lévi-Strauss at 100 – Vitro Nasu
Previous
Next 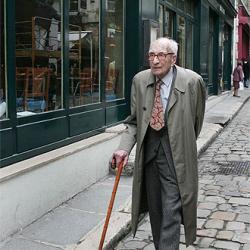 Claude Lévi-Strauss did not see the West as superior (via)

“Every effort to understand,” he says, “destroys the object studied in favor of another object of a different nature.” Or: “Anthropology could with advantage be changed into ‘entropology’, as the name of the discipline concerned with the study of the highest manifestations of [a] process of disintegration.” (Tristes Tropiques)

• The Antinomies of Tolerant Reason by Slavoj Zizek

To many a Western historian of religion, Islam is a problem – how could it have emerged after Christianity, the religion to end all religions? Its very geographic place belies the cliché on Orientalism: much more than belonging to the Orient, the location of Islam makes it a fatal obstacle to the true union of the East and the West – the point made exemplarily by Claude Levi-Strauss:
“Today, it is behind Islam that I contemplate India; the India of Buddha, prior to Muhammad who – for me as a European and because I am European – arises between our reflection and the teachings which are closest to it /…/ the hands of the East and the West, predestined to be joined, were kept apart by it. /…/
The West should return to the sources of its torn condition: by way of interposing itself between Buddhism and Christianity, Islam islamized us when, in the course of the Crusades, the West let itself be caught in the opposition to it and thus started to resemble it, instead of delivering itself – in the case of the inexistence of Islam – to the slow osmosis with Buddhism which would christianize us even more, in a sense which would have been all the more Christian insofar as we were to mount beyond Christianity itself. It is then that the West has lost its chance to remain woman. [1]”
This passage from the last pages of Tristes tropiques articulates the dream of a direct communication and reconciliation between West and East, Christianity and Buddhism, male and female principles.

Saudades do Brasil: A Photographic Memoir

The Savage Mind – included here are some quotes from this work

Lévi-Strauss thinks the trickster of many Native American mythologies acts as a “mediator”. Lévi-Strauss’s argument hinges on two facts about the Native American trickster: (1) the trickster has a contradictory and unpredictable personality; (2) the trickster is almost always a raven or a coyote. Lévi-Strauss argues that the raven and coyote “mediate” the opposition between life and death. The relationship between agriculture and hunting is analogous to the opposition between life and death: agriculture is solely concerned with producing life (at least up until harvest time); hunting is concerned with producing death. (Wiki on Claude Lévi-Strauss)

Claude of the Jungle: The other Lévi-Strauss turns 100 By Benjamin Ivry

More links here, including this from the Anthropologi.info.org.