What I am searching for is neither the real nor the unreal, but the Subconscious the mystery of what is Instinctive in the human Race.
Modigliani’s intense artistic, spiritual [for him no distinction existed between these two states of being] search to express what he saw as the mysterious, innermost beauty of the human soul, drew him to Buddhist, Indian, Greek, Etruscan, Egyptian, African, early Italian and Renaissance art. (via)

“Everything rings true in this totally false film. Everything is illuminated in this obscure film. For he who leaps into the void owes no explanations to those who watch.” Jean Luc Godard

Montparnasse 19 was originally to have been directed by Max Ophüls with a script by Henri Jeanson. Becoming ill, Ophüls turned the project over to Jacques Becker. Dissatisfied with Jeanson’s script, Becker re-wrote the scenario. (Leap into the Void, Godard and the Painter) 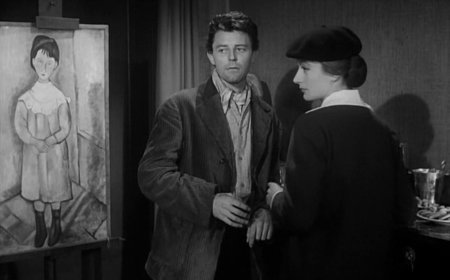 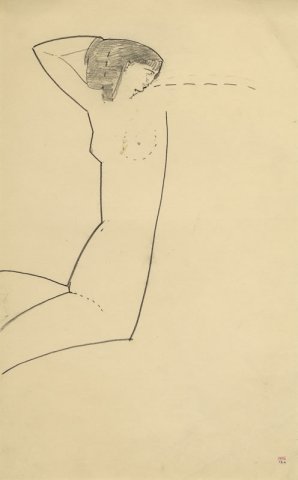 He met the first serious love of his life, Russian poet Anna Akhmatova, in 1910, when he was 26. They had studios in the same building, and although 21-year-old Anna was recently married, they began an affair. Tall (Modigliani was only 5 foot 5 inches) with dark hair (like Modigliani’s), pale skin and grey-green eyes, she embodied Modigliani’s aesthetic ideal and the pair became engrossed in each other. After a year, however, Anna returned to her husband.
Gallery of works (wiki Modigliani)

“Anna Akhmatova’e memoir, fifty-four years later, of her affair with Modigiliani in 1911. Sitting in the rain under an unreliable umbrella in the Luxemberg Gardens and reciting Verlaine to each other — unable to afford anything Gander” Page 7 David Markson – Vanishing Point.

Jeanne Modigliani, the only surviving daughter of Modi and Jeanne is on wiki here.