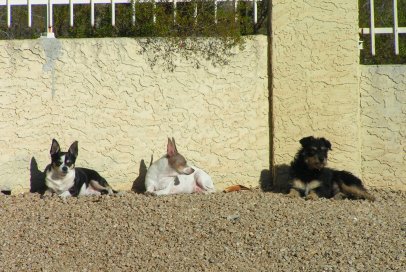 Spike, Daisy and Monty sunbathing in the backyard. 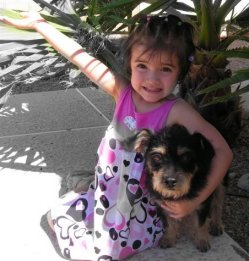 This is a true story of how a stray dog found us and chose us to be his family.

On Oct 1, 2010 a cute worn out dirty stray dog charmed our granddaughter in front of our house.
She came running and told us about the dog with no family. He was determined to be adopted by us. We had to take him in. I don’t know how many days he spent on his own. He had bruises, ticks and fleas and he was skin and bones.
We called him Monty and our granddaughter who is four wanted to call him Socrates (she learned from the children’s book about an orphan dog looking for a new home). 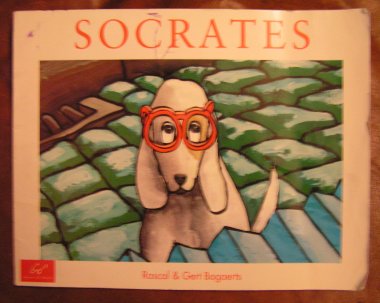 Our two dogs accepted him . He seemed to experience separation anxiety whenever he was alone. Ten days later while we were away for two hours, Monty Socrates managed to squeeze through the front gate and took off. Probably thinking he was chasing us. He never came back.
We learned about the County animal control facilities where, by law, all stray dogs must be sent. They have two facilities, Phoenix and Mesa.
The first facility, Phoenix, we went was very far away and had 600 dogs. Many of them look ferocious, boxer types. (very depressing place).
We found him at the second facility, Mesa, unbelievable. According to animal control he has caught in Mesa, over ten miles and three freeway crossings away from home. Monty went crazy when he saw us and convinced the handler that he was our dog.

Monty listening to Monty Socrates – (Film still of Monty from ‘I Confess” directed by Hitchcock – a youtube clip here.)

I did check the I Ching when I lost him. I got Peace changing to Returning. I did not want to trust the oracle at the time, for once the I Ching made the right predictions. 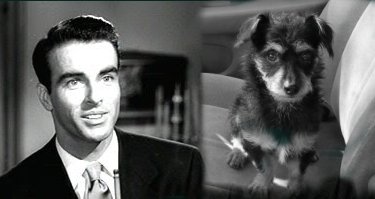 Monty Clift in Search on youtube, his film debut.

Clift’s first movie was opposite John Wayne in the 1948 film Red River which was shot in 1946 and released in 1948. Clift’s second movie was The Search. Clift was unhappy with the quality of the script, and rewrote most of it himself. The movie was nominated for a screenwriting Academy Award, but the original writers were credited. Clift’s performance saw him nominated for an Academy Award for Best Actor. His naturalistic performance led to director Fred Zinnemann being asked, “where did you find a soldier who can act so well?” (via wiki)

Fred Zinnemann who directed “the Men” also made the “The Search” and “From Here to Eternity”.
Fred introduced Marlon Brando and Monty Clift to the world via Hollywood movies. The two great pioneer actors were both trained stage actors.
(Both Marlon and Monty were born in Omaha, Nebraska – M & M from Omaha.)