R.I.P Vaclav Havel – a leader of the Velvet Revolution and the first democratically elected President of the Czech Republic… He wrote plays, Letters to Olga and many theater works..
Vaclav Havel 1936-2011 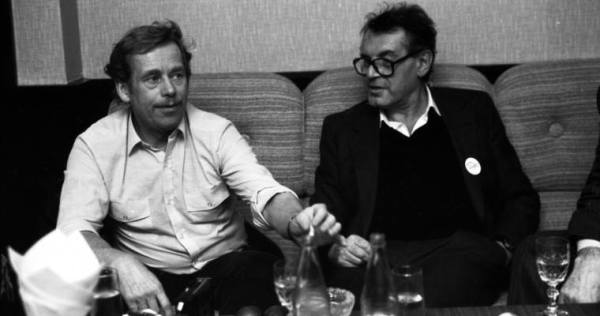 Shy and bookish, with wispy mustache and unkempt hair, Havel came to symbolize the power of the people to peacefully overcome totalitarian rule.”

Based on his own play, Leaving is “about — what else? — a politician trying to adjust to a new life after leaving politics.” It “tells the story of Vilém Rieger, the former chancellor of an unnamed country, locked in a battle of wills with his successor, the unsavory Vlastík Klein. It’s a King Lear-like contemplation on a politician’s frustrating impotence at finding himself slowly being forced out of his beloved government villa, with several of Havel’s favorite actors among the cast. They include his wife Dagmar [Havlová], who plays the chancellor’s wife, Irena.”

On the day of Havel’s death, Czech novelist Milan Kundera said, “Václav Havel’s most important work is his own life.” There’s a moral there somewhere, one that Havel would have appreciated very much indeed.

The Power and the Powerless – Obit from Artinfo

in the Prague Castle
This photo was presented as The Articles of Faith here.