Deprecated: Return type of HM\BackUpWordPress\CleanUpIterator::accept() should either be compatible with FilterIterator::accept(): bool, or the #[\ReturnTypeWillChange] attribute should be used to temporarily suppress the notice in /home/mutanteg/public_html/vitro-nasu/wp-content/plugins/backupwordpress/classes/class-path.php on line 456
 Ben, Audrey and Martha – Vitro Nasu
Previous
Next

Quite possibly the most stunning shot in Fassbinder’s entire oeuvre: two dizzying orbits, and two destinies intertwined with consummate precision.(commentary via youtube)

Martha, long unavailable, proves to be one of Fassbinder’s dramatic and visual triumphs. It features a brilliantly stylized performance from star Margit Carstensen and the virtuosic camerawork of Fassbinder’s frequent collaborator, Michael Ballhaus. This riveting tale of a sado-masochistic marriage is astonishing in its balance of psychological horror and pitch-black comedy.

Ben Gazzara, an intense actor whose long career included playing Brick in the original “Cat on a Hot Tin Roof” on Broadway, roles in influential films by John Cassavetes and work with several generations of top Hollywood directors, died on Friday in Manhattan. He was 81.

In Cassavetes’s Husbands (1970), The Killing of a Chinese Bookie (1976) and Opening Night (1976), “he plays varieties of himself, as Cassavetes saw him: the moderate man who loses his head and takes immoderate action,” blogs the New Yorker’s Richard Brody. 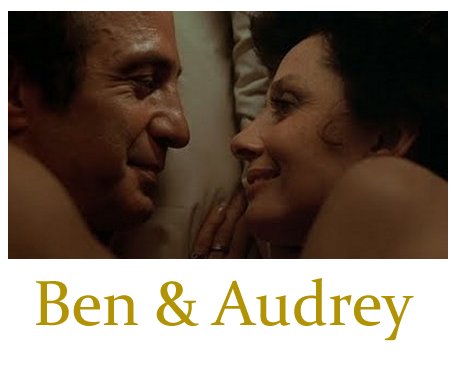 I was enraptured. I was flattered that someone like that would be in love with me. But I didn’t know how deeply she was in love with me until I left her. She told others, not me, that I broke her heart. That’s the kind of classy woman she was.”read more here

Ben and Audrey co-starred in two films, Bloodline (1979) and They All Laughed (1981).. (usually overlooked by Audrey Hepburn fans).

“Making Saint Jack was one of the great experiences of my life,” Gazzara told Ben Slater, author of Kinda Hot, which tells the story of the making of Peter Bogdanovich’s 1979 adaptation of Paul Theroux’s novel.