Boris Vian and The Mood Indigo by Michel Gondry 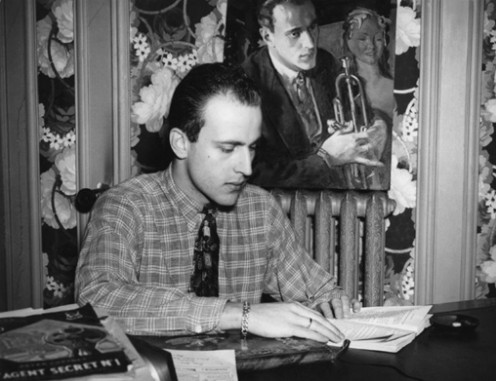 The Sheik of Araby (his jazz)

Boris Vian (French: [bɔʁis vjɑ̃]; 10 March 1920 – 23 June 1959) was a French polymath: writer, poet, musician, singer, translator, critic, actor, inventor and engineer. He is best remembered today for his novels.
Vian was also an important influence on the French jazz scene. He served as liaison for Hoagy Carmichael, Duke Ellington and Miles Davis in Paris, wrote for several French jazz-reviews (Le Jazz Hot, Paris Jazz) and published numerous articles dealing with jazz both in the United States and in France. His own music and songs enjoyed popularity during his lifetime, particularly the anti-war song “Le Déserteur”

Mood Indigo (French: L’Écume des jours) is a 2013 French film co-written and directed by Michel Gondry and co-written and produced by Luc Bossi, starring Romain Duris and Audrey Tautou. It is an adaptation of Boris Vian’s 1947 novel Froth on the Daydream.

Death
On the morning of 23 June 1959, Vian was at the Cinema Marbeuf for the screening of the film version of I will Spit on Your Graves. He had already fought with the producers over their interpretation of his work, and he publicly denounced the film, stating that he wished to have his name removed from the credits. A few minutes after the film began, he reportedly blurted out: “These guys are supposed to be American? My ass!” He then collapsed into his seat and died from sudden cardiac death en route to the hospital (Boris Vian, wiki)