Long, long ago, I wrote a paper called Japanese Farmhouses for my art history class. Seeing “Twilight Samurai” brought the memory back. My earlier post indicated my intention to see the film and I finally found the DVD with a different and unattractive cover. 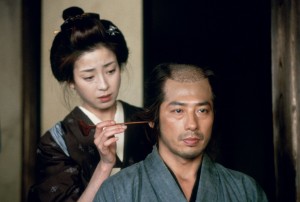 Twilight Samurai is narrated by Keiko Kishi who made a brief appeance at the end. Madame Kishi received Legion of Honor from the French government in 2002. (From here.) She worked with Ozu (Early Spring) , with Kon Ichikawa (Ototo, Makioka Sisters), with Sydney Pollack (Yakuza) and with Kobayashi (Kwaidan).

Hiroyuki Sanada is finished shooting the “White Countess”.
He did his best not to blow Tom Cruise away in “The Last Samurai”
(It still looked like Tom Cruise got blown away by many excellent Japanese cast).
Hiroyuki Sanada as the Fool in King Lear. 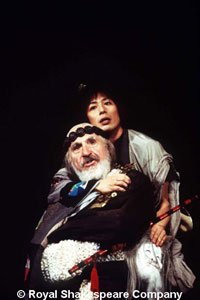 The Fool with King Lear (Nigel Hawthorne)
Receiving the MBE for his work in King Lear with The Royal Shakespeare Company(from here.)
Hiroyuki Sanada, a martial art trained actor had a singing career and played Romeo and Hamlet when he took acting seriously.
Found this film (Tadon and Chikua) today, Hiroyuki Sanada with Yakusho Koji – looks like a comedy. I doubt that I will ever get to see this film.

No this is not John Hurt playing a Japanese character, his name is Tanaka Min and you can catch him acting in “Twilight Samurai”.

Tanaka Min is a butoh dancer who got recruited by Yoji Yamada to play against Hiroyuki Sanada who is the main character. Yoji picked him for his body and his face and of course he was looking for a dancer to play a character.
He wanted to show a slow death. Min Tanaka lost many pounds to prepare for this role by eating only beans for his diet. (“The unbearable lightness of beans” put in effect as a workable diet regimentation.”)
His name Min Tanaka can be shortend to mean Minka
Here, the famous village Shirakawa
(Film location is in Yamagata and I have not done the research).

(William Shakespeare was born on April 23 – the actual birthday is not known).
We can move from King Lear to Macbeth.
Check this old web art.
La regina , mio signore , è morta (The Queen, my lord is dead).
The best place to waste your glory – hypermacbeth by dlsan. (An Italian Shakepearean actor and web artist.)

The Russian Hamlet, where I got introduced to Shostakovich – the greatest filmscore composed by a master.