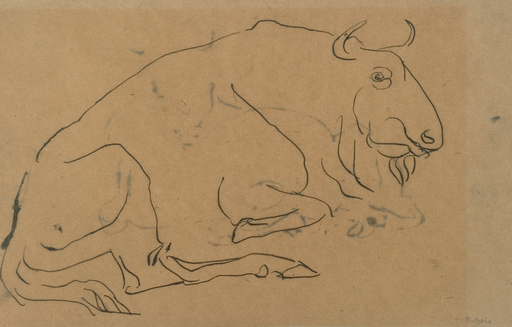 sketch of a Bison Henri Gaudier-Brzeska

Pound supported the impoverished Gaudier-Brzeska in a practical way, too, not only by purchasing carvings but also by presenting him with a block of marble for a specially commissioned portrait.
There was also a vein of impish humour in Gaudier-Brzeska’s work. Even the Hieratic Head of Ezra Pound could be seen, especially from the rear, as a circumcised phallus..(via)

Not to confuse with the trash metal Savage Messiah, Savage Messiah is Ken Russell’s most loving bio opic on Henri Gaudier Brezeska.. 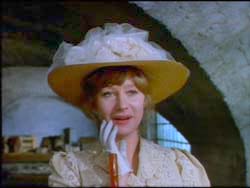 Gaudier-Brzeska’s short life was a very interesting one. In 1910 he moved to London, England, and it was there that he met the person who would be arguably the biggest influence on the man and his work: Sophie Brzeska
Sophie was a Polish woman who was almost twice the age of Henri, but the age difference did nothing to stop a very special bond developing between the two. Although for much of the time their relationship appeared to be almost entirely platonic, there can be little doubt that the two were soul mates. Their relationship was very awkward, however, and at times almost appeared to be sado-masochistic, with Henri mentally torturing Sophie and playing on her insecurities. The two were well suited to this sort of setup, and the age difference seemed to define their general behaviour almost by default; Henri’s youthful exuberance offset against Sophie’s world-weary outlook on life.

Derek Jarman who started his film career by designing the set of Russell’s “The Devils’ continued to work in “The Savage Messiah”.

Another Savage Messiah had a birthday yesterday (Feb 9)
Added his blog Thomas Bernhard in the sidebar menu.